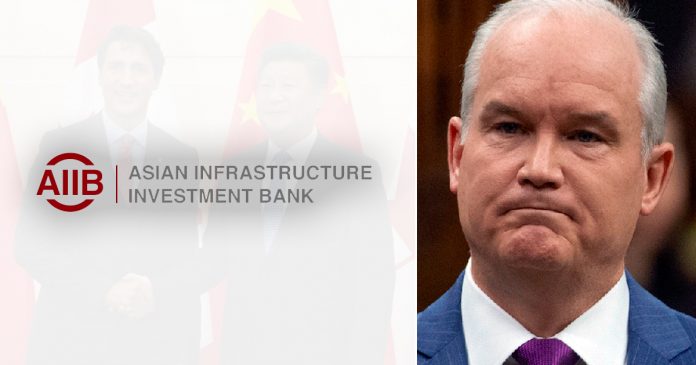 Canada is due for a $40 million payment to the bank which is led by the Chinese government this month.

“When the AIIB was first proposed it was criticized by the Obama administration as a political tool that the Chinese government would use to expand its influence throughout Asia,” O’Toole wrote.

“Furthermore, concerns about the AIIB’s environmental records, labour standards and overall commitment to human rights continue to this day.”

O’Toole also cited China’s hostage diplomacy and its ongoing genocide against the Uyghur Muslim minority in the Xinjiang region as a reason to end payments.

Both Kovrig and Spavor are currently facing trial in China and Chinese authorities are refusing to give Canadian and international diplomats access. Both Canadians are facing various trumped up national security charges including espionage.

According to the Canadian Press, the federal government has yet to confirm whether the payment has been processed and handed over to the AIIB.

Earlier this month, Finance Minister Chrystia Freeland indicated that Canada will follow through with its two final payments to the bank this year and in March 2022.

“We should also be looking at using other tools at our disposal to put pressure on Chinese authorities, such as withdrawing from the Asian Infrastructure Investment Bank … banning Huawei from the build-out of Canada’s telecommunications network, and a range of other measures,” said Conservative MP Michael Chong on the matter.

When the CIIB was first introduced by the Liberal government in 2017, Trudeau pledged to contribute $256 million in taxpayer funds to the project.