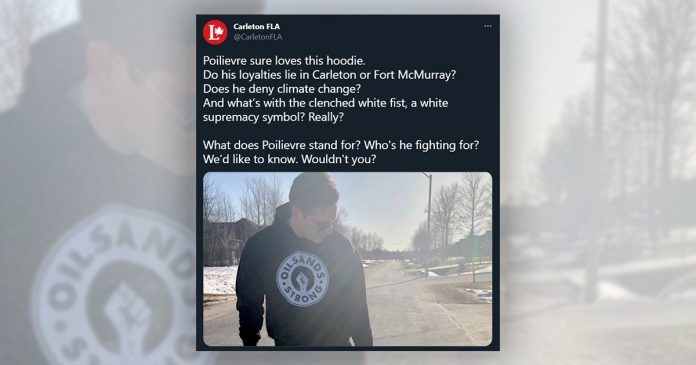 Conservative MP Pierre Poilievre demanded an apology from Prime Minister Justin Trudeau and the Liberal Party after the Federal Liberal Association (FLA) in Poilievre’s riding accused him of donning a “white supremacy symbol.”

On Thursday, the Carleton FLA made the inflammatory accusation in a tweet which has since been deleted by the account.

“Poilievre sure loves this hoodie. Do his loyalties lie in Carleton or Fort McMurray? Does he deny climate change? And what’s with the clenched white fist, a white supremacy symbol? Really?” tweeted Carleton FLA.

The symbol in question is the logo of the pro-energy grassroots organization Oil Sands Strong, which was founded by Robbie Picard who is a Métis Canadian.

In response to the tweet, Poilievre accused the Liberals of slandering the group which he characterized as “multicultural” and diverse.

“A Liberal Party tweet slandered this multicultural group founded by this Métis man to champion diversity in the energy sector. The tweet disparaged Fort Mac & falsely alleged racism.Trudeau & Local Liberal, Chris Rodgers must apologize to these workers for this appalling lie,” tweeted Poilievre.

Rodgers is currently Trudeau’s Director of Policy at the Queen’s Privy Council and formerly served as the official Liberal candidate for Carleton in the 2019 election.

“[The Liberal Party] says my husband is racist! I am his wife; Venezuelan with brown skin proud of my roots. I speak Spanish to our daughter, I cook arepas and Creole pavilion. Our home is multicultural [like] Canada,” tweeted Anaida Poilievre in Spanish which has since been translated into English for the purpose of this article.