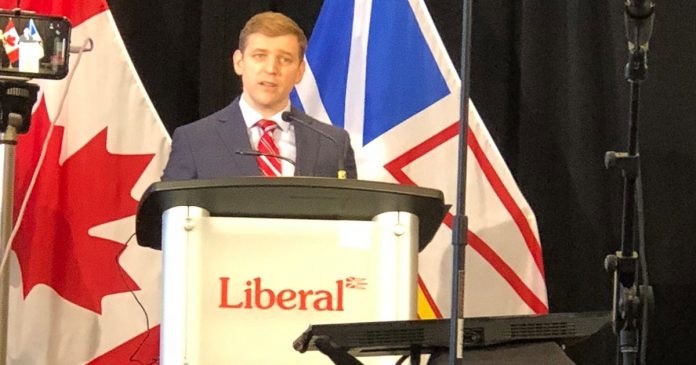 The Liberal Party of Newfoundland and Labrador will form a majority government after a chaotic election season postponed by the coronavirus pandemic.

According to results released Saturday, the Liberals won 22 seats, an increase of two from the previous election, with PC Party leader Ches Crosbie and NDP leader Alison Coffin losing their seats to Liberal candidates.

The results come after six weeks of postponements because of COVID-19. Just days before the Feb. 13 election date, the province faced a large outbreak leading to the postponement of the  election in half of the provincial districts before the whole election was eventually rescheduled.

Speaking to a small group of supporters, premier-elect Andrew Furey gave little in the way of celebration, instead focusing on the need to address the province’s abysmal economy.

“Our dire economic outlook was further burdened by the pandemic, and it took a massive toll, but it has also exposed an even bigger opportunity, a chance to make a tectonic shift in who we are and where we’re going as a province,” he said.

Newfoundland and Labrador faces the both the highest rates of unemployment and highest per-person debt.

Furey was appointed as premier in 2019 after the resignation of Premier Dwight Ball. According to N.L. election laws, he was not required to hold an election until August 2021.

Opposition leader Ches Crosbie, who lost his seat by a margin of over 500 votes, said his future as PC party leader will be decided at a later date.

“In light of the outcome of the election, I will be speaking with my family, my caucus and the executive of our Party, and I will take a few days to reflect on what has happened and determine where we go from here,” he said.

Furey was heavily criticized for his decision to hold an election during a pandemic, with critics calling it an opportunist attempt to secure a majority for himself during a public health emergency.