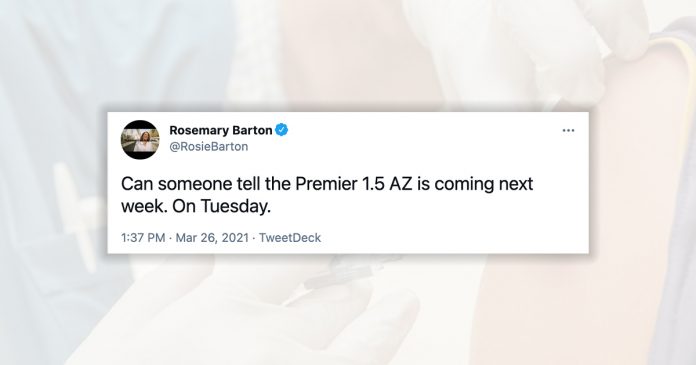 Canadians blasted CBC host and TV personality Rosemary Barton for a tweet, in which she came to the defense of the Trudeau government after Ontario Premier Doug Ford criticized the federal vaccine rollout.

“Can someone tell the Premier 1.5 AZ is coming next week. On Tuesday,” tweeted Barton on March 26.

Days after Barton’s tweet, the AstraZeneca vaccine was deemed unsafe for those under 55 by Canada’s National Advisory Committee on Immunization (NACI).

Barton’s tweet was in response to Ford’s statements last Friday that the vaccine supply was “becoming a joke” and the federal government botched its effort to acquire enough shots for Canadians.

“Enough’s enough. This is becoming a joke. We need more vaccines. Simple as that. At the end of the day, they’ve dropped the ball majorly,” Ford said.

“I’m as frustrated as they come. How can you plan when the feds aren’t even giving us a date? If they could give us a date we’d be able to expand the pharmacies right across the province.”

Since Barton’s tweet was published, it has received over 1,000 comments, many of which were critical of her statement.

Conservative MP Michelle Rempel Garner was among those who responded to Barton’s tweet on Monday.

“So, about that,” Rempel Garner tweeted after NACI recommended provinces pause the use of the AstraZeneca vaccine on those under the age of 55.

Meanwhile Canadian political organizer Jim Burnett tuned in by bringing up Barton’s ongoing lawsuit against the Conservative Party of Canada.