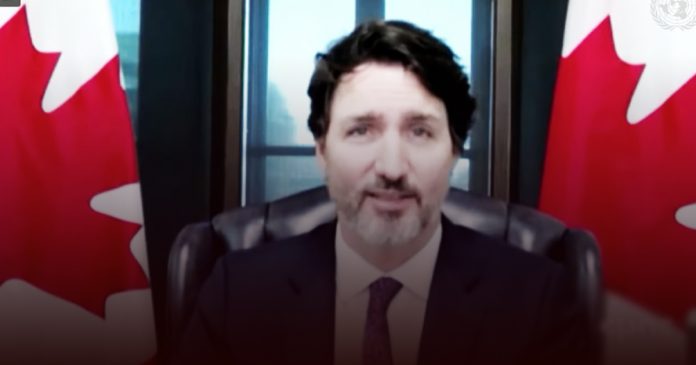 On Monday, Trudeau attended a virtual UN summit alongside Secretary General António Guterres and Jamaican Prime Minister Andrew Holness where he addressed a myriad of issues including the global economic response to the COVID-19 crisis, foreign aid and climate change.

In an emailed statement sent to True North, MP John Williamson slammed the prime minister’s inclusion in the summit saying that the Liberal government’s track record on the economy should bar Trudeau from speaking as an authority on a looming debt crisis.

“Justin Trudeau should not be out in front at the United Nations on likely policy responses to a looming debt crisis. His government represents precisely what not to do,” said Williamson.

“Under his watch, Canada’s federal government spent recklessly in the good years before the coronavirus pandemic hit, making our country more vulnerable to credit difficulties when the economy hit the wall. In June, Canada’s credit rating was downgraded from Triple-A to Double A-plus by one agency.”

While at the summit, Trudeau called on world leaders to work together on international aid for developing nations and suggested that the pandemic was making the effects of climate change worse.

Williamson also went on to criticize the Trudeau government for spending more on average than any other G7 nation on recovery, yet the country still has a higher unemployment rate than its allies. According to the Organization for Economic Co-operation and Development Canada’s unemployment rate surged to the top of the G7 list in February 2021.

Conservative Senator Leo Housakos echoed Williamson’s remarks, saying that it was “laughable” that the international community would point to the Trudeau government as a success story.

“The Trudeau government has failed at every opportunity in responding to this pandemic and our economy will suffer as result, for years to come; not the least of which was his complete reliance on CanSino, to provide Canadians with vaccines which severely placed Canada behind the curve,” Housakos told True North.

“As a result, Trudeau has made our provinces dependent on lockdowns and endless subsidies. This has cost the lives of Canadians, as well as caused significant damage to the  mental health of all Canadians and has severely handicapped our capacity to have an economic recovery.”

True North reached out to Finance Canada for a response to Housakos’ and Williamson’s critiques but did not receive a response in time for publication.

The Trudeau government is expected to deliver a budget on April 19 for the first time in over two years. The plan will take account of the government’s coronavirus emergency spending to date and chart the Liberal government’s fiscal plan into the future.