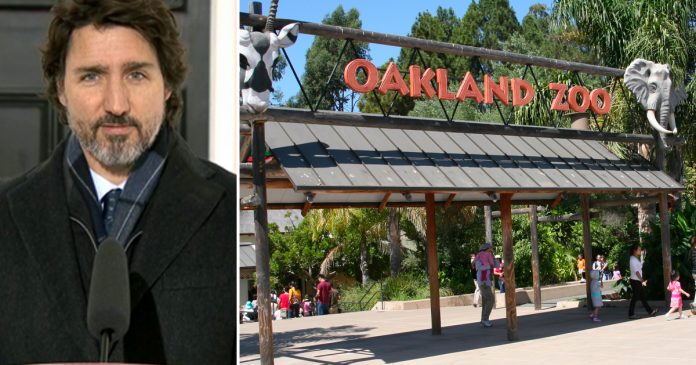 A US zoo is on track to vaccinate its at-risk animals before many Canadian adults can expect to get their first COVID-19 shots.

Conservative MP and Health Critic Michelle Rempel Garner slammed Prime Minister Justin Trudeau on Twitter in response to the news, saying that it was an example of how badly the Liberals have botched Canada’s vaccine response.

According to ABC 7 News, the Oakland Zoo plans on vaccinating all of its primates and other species such as big cats. The zoo is expecting to receive 100 doses of a COVID-19 vaccine developed by the veterinary drug company Zoetis.

Critics have accused the Trudeau government of failing Canadians by not securing enough vaccines on time. As of March 30, 2021, data shows that Canada currently places 65th in the world for cumulative COVID-19 vaccinations per 100 people.

A recent announcement by Canada’s National Advisory Committee on Immunization (NACI) recommended that provinces halt the use of the AstraZeneca vaccine for those under the age of 55 because of blood clot issues detected in its use.

“I understand how challenging this can be for Canadians. The science is evolving as we get more and more data experts are refining and shifting their recommendations,” said Trudeau.

“The bottom line for Canadians is the right vaccine for you to take is the very first vaccine that you are offered.”

“We do not have enough vaccines from the federal government and it’s a joke. Fifty-fifth in the world,” said Ford.