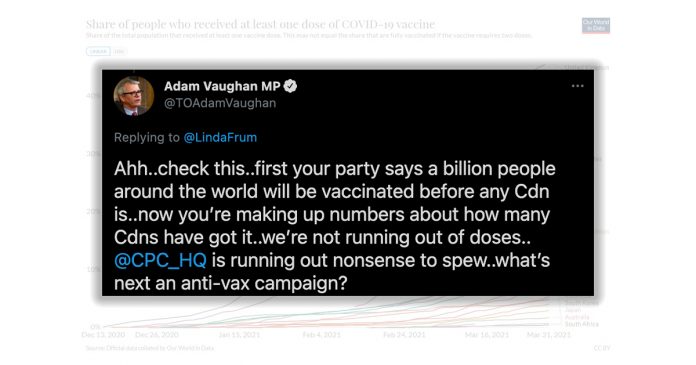 Toronto-area Liberal MP Adam Vaughan disputed the fact that only 1.75% of Canadians have received two doses of the COVID-19 vaccine and accused Conservative Senator Linda Frum of “making up numbers” despite Frum sourcing an official Government of Canada database.

In response to Frum’s tweet claiming that less “than 2% of Canadians” have been fully vaccinated against COVID-19, Vaughan made several accusatory statements specifically targeting the senator and Conservative Party at large.

“Ahh..check this..first your party says a billion people around the world will be vaccinated before any Cdn is..now you’re making up numbers about how many Cdns have got it..we’re not running out of doses.. [The Conservative Party] is running out nonsense [sic] to spew..what’s next an anti-vax campaign?” tweeted Vaughan on Thursday.

One of Vaughan’s central claims is the accusation that Frum was “making up numbers” regarding how many Canadians have received two doses of the coronavirus vaccine.

A True North fact check found Vaughan’s claim to be false – Frum relied on and sourced verified data that Vaughan’s own government published.

As indicated by Frum in a followup tweet, the information she was referencing were found on the Government of Canada’s COVID-19 vaccination information hub.

“What? I am ‘making up numbers?!’ Here is the Government of Canada database that says only 1.75% of Canadians have received 2 doses. Canadians waiting on doses aren’t fooled by your disinformation. 86% of us haven’t even had 1 dose yet,” tweeted Frum.

Clearly displayed on the website under the “key updates” section is the statement that “1.75% of the population has received two doses” which substantiates Frum’s earlier claim that less than 2% of Canadians have been fully vaccinated.

As noted, the weekly vaccination report was the result of a collaboration between provincial and territorial governments and the Pan-Canadian Public Health Network’s Canadian Immunization Registries and Coverage Network.

By casting doubt on the validity of official coronavirus data, True North found that Vaughan contributed to the atmosphere of misinformation and vaccine hesitancy.