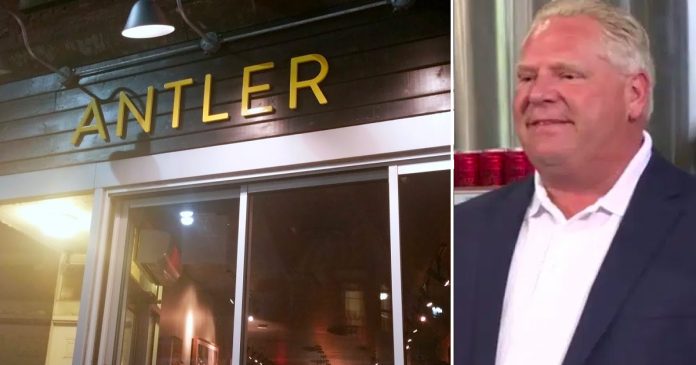 A Toronto restaurant has sent Premier Doug Ford a bill for $431.55 for beer that will be spoiled because of Ontario’s third lockdown.

Antler Kitchen and Bar on Dundas St. sent Ford the invoice and a letter expressing offense that he abruptly barred patio dining in Ontario right before the Easter long weekend, a mere two weeks after allowing it in Toronto.

“Two weeks ago, you assured Toronto restaurateurs that we were safe to open our outdoor spaces to our diners,” wrote owners Michael Hunter and Jody Shapiro.

“Having been locked down for over 100 days in Toronto, and competing with restaurants open for indoor dining just outside the city, we followed all the proper protocols and jumped at the chance to open. It was a path for our business to survive.”

As of Saturday, Ontario triggered a provincewide “emergency brake.” Under this modified lockdown – which the government is calling a “shutdown” – indoor and outdoor dining are prohibited, as are indoor gatherings. Stricter limits have also been put on businesses and religious services.

Hunter and Shapiro note their business has had to deal with constantly changing restrictions and multiple lockdowns, accusing the Ford government of not respecting businesses.

“You say you care about Toronto’s restaurants. And we know you care about beer. So we’re sending an invoice to you for two kegs worth of beer that will spoil because of this shut down,” Hunter and Shapiro wrote.

“We’re literally hiring, paying, and then laying off the same employees during the same payroll period.”

According to one recent survey, 51% of Canadian businesses are concerned they will not survive the financial hardships caused by the pandemic and lockdowns.

The Ford government has been previously slammed by businesses for escalating restrictions and shifting the goalposts on coronavirus statistics.