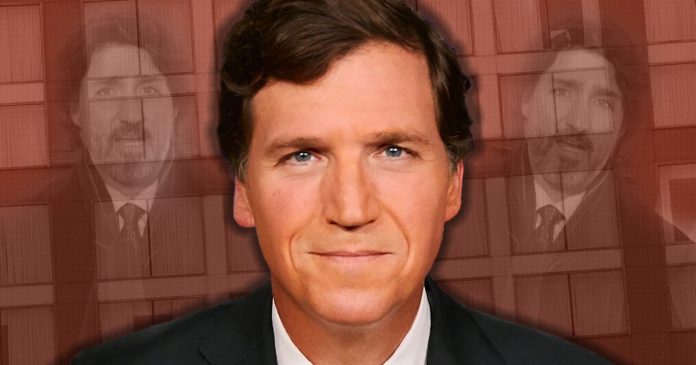 “What if your next door neighbour suddenly went dangerously insane and starting holding people hostage in his house?” Asked Tucker Carlson during his evening show on Wednesday — the most-watched political show on television.

He was talking about boring old us, Canada, and how under the leadership of Justin Trudeau, “Canada took a dramatic move toward legitimately dangerous authoritarianism.”

He was referring to an order released by Trudeau on Monday, outlining the latest bit of Martial Law being imposed on Canadians.

“Now is not the time to travel. If you have plans to head somewhere for the long weekend, cancel them,” Trudeau instructed.

“For those who need to travel, take note of the measures that are in place when you return to Canada: If you’re flying back into the country, you’ll need to show a negative PCR test result before you board the plane. When you land, you’ll need to take another PCR test. You’ll then have to wait at an approved hotel, and at your own expense, for your results to come back.”

“Approved hotel” it seems, is the latest Trudeau-euphemism for what Carlson more accurately describes as “internment camps.”

Internment camps where YOU pay the bill.

A non-optional stay at a government facility… that sounds a lot like an internment camp. Reaction on Twitter went even darker, where high profile comedians and athletes compared the “hotels” to gulags and concentration camps.

Fortunately for Trudeau, he has his own propaganda machine to cover for his attacks on our rights and freedoms.

Back in October, the CBC assured Canadians that any talk of “internment camps” was false.

According to the fact-checkers over at the state broadcaster, who quote an unnamed Liberal spin doctor to substantiate their report, the feds were merely providing “voluntary quarantine sites” — only to be used by homeless people and international travellers with nowhere else to go.

The CBC story was not updated or corrected on Monday when Trudeau contradicted their report by informing Canadians that forced stays at these quarantine sites was “not optional.”

“Suddenly Canada is a flagrant violator of the most basic human rights. Fail a covid test and they will lock up without trial,” said Tucker Carlson.

Why does it take the host of an American cable news show to say what Canadian journalists and activists should be filling newspapers and airways condemning?

Canada’s pundit class is too busy ho-humming about a possible spring election to notice or care about the usurping of Habeas corpus.

Fortunately for Canadians, not everyone is burying their head in the sand. I spoke to the lawyers at the Justice Centre for Constitutional Freedoms (JCCF), who outlined the many ways that Trudeau’s orders are in fact unconstitutional, and how they are fighting back.

JCCF President John Carpay explained that this order could violate Section 7 of the Charter — the right to life, liberty and security of person.

Carpay explained that a government locking people up against their will, with no due process, no presumption of innocence and an absence of a timely trial before an independent and impartial court, were all red flags.

He told me that his organization was fighting back, and initiating “court action against these hotel-prisons.”

Jay Cameron, one of the JCCF lawyers on that case, called this “the essence of authoritarianism” and expressed concern that “Parliament has not considered or voted on the forced internment of Canadians.”

Likewise, Sayed Hassan, the other JCCF lawyer on the case, pointed out that the location of these forced quarantine hotels is unknown.

“There should be no room in a free and democratic society for secret federal facilities,” he said.

This is Justin Trudeau’s Canada.