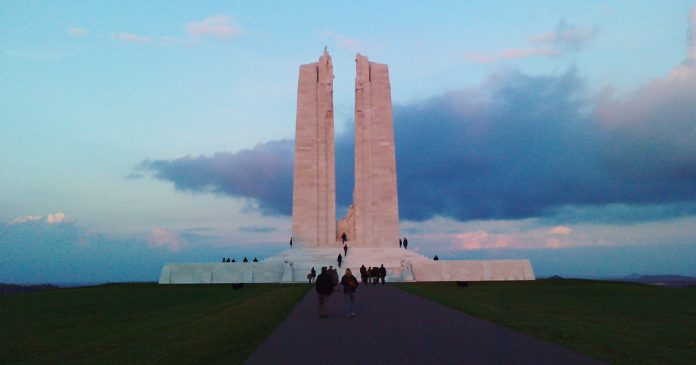 In the history of any country, there exists moments which define that nation’s character and identity. The Battle of Vimy Ridge is one of those milestones for Canada.

On April 9, 1917, on a cold and wet Easter Monday, thousands of Canadian soldiers embarked the rough terrain of Vimy, Pas-de-Calais, France dodging bullets and shrapnel during a grueling battle against the German Empire.

Their struggle would be a turning point for the Great War and a lesson of virtue for all nations.

French and Allied regiments who had gone before them had been laid waste by the German war machine and the world turned to Canada as its last hope.

Canadian divisions fought non-stop, each line of brave men being replaced by another, intent on taking the long-held German position. The fight would wage on for over three days claiming the lives of 3,500 Canadians and injuring 7,000 others.

Finally, on April 12th, after suffering a relentless barrage of bullets and incoming German artillery fire, Canada had gained the upper hand. Within hours the German lines broke and the Allies declared Vimy Ridge theirs.

It was a campaign of military brilliance, Canadian technological prowess and sheer northern grit.

Canadians can look to the legacy left behind by the brave souls who risked it all to serve their country.

The Battle of Vimy Ridge teaches us that even under impossible odds and through the toughest of circumstances, Canada marches on.

As a marker of that Canadian spirit, the Canadian National Vimy Memorial still reaches into the open sky today as a reminder of Canada’s limitless potential.