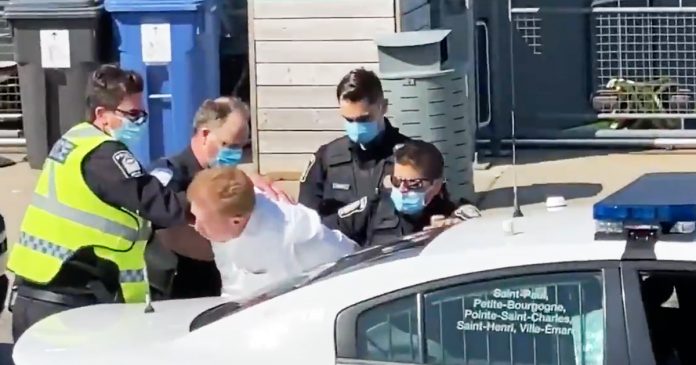 A temporary Montreal base of Rebel News has been raided by Montreal police.

According to Ezra Levant, on Saturday a large number of police officers showed up at an Airbnb houseboat Rebel crews are currently using for accommodations and as a makeshift Montreal headquarters.

Various videos posted online show a large number of officers creating a perimeter and forcibly preventing Levant and Rebel staff from entering. Police taped off the area, which Levant said was because officers were treating it as a “crime scene.”

Levant said no warrant was provided for the search.

In conversation with one of the officers, Levant was told an investigation was ongoing inside the Airbnb, saying no one is allowed inside until police have completed their work.

Video shows Rebel reporter David Menzies being placed in handcuffs and put into the back of a police cruiser. His colleague Keean Bexte was also handcuffed, though was later released.

According to CTV News, Montreal police said about a dozen people were onboard the boat. The police said no arrests were made, but a report will be given to the Crown Prosecutor’s office.

The police claim individuals inside the houseboat were not following COVID-19 pandemic rules regarding masks and social distancing.

Rebel News has been in Montreal covering anti-lockdown protests and the heavy-handed approach Montreal police have taken to enforce public health orders. The online outlet’s journalism has resulted in thousands of dollars in fines laid against its journalists in Montreal alone.

In March, Rebel News released footage showing a Montreal police officer asking, in French, if they were members of the “Jew media.”