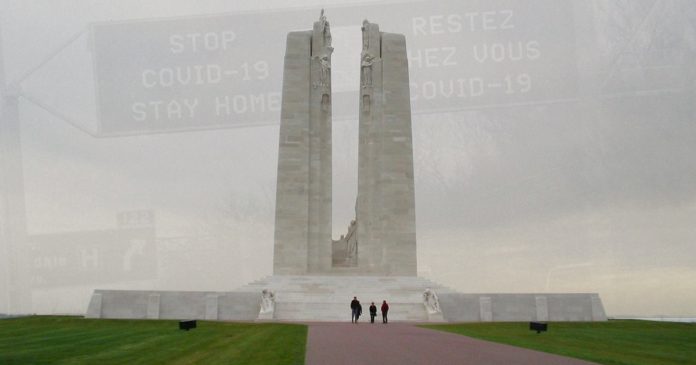 On this day in 1917, a few thousand young Canadian men changed the course of history.

The Battle of Vimy Ridge was fought from April 9 to 12, and it wasn’t just Canada’s most celebrated military victory to date, it was the major turning point of the First World War.

Earlier that spring, the communist revolution in Russia meant that Britain’s ally in the east was absorbed and ready to surrender the Eastern Front. This allowed the German war machine to focus its efforts entirely on breaking the stalemate on the Western Front.

The tired and near-defeated French and British troops relied heavily on the 100,000-strong Canadian Corps, who set up station in Vimy, Pas-de-Calais, France and began training and preparing for battle. They rebuilt the beat-up trenches, tunnels and roads and rehearsed their assault. They used new artillery tactics and created an innovative decentralized command — where individual soldiers were empowered to think for themselves and show greater leadership.

It took months to prepare, and just four days to defeat the Germans, which was the beginning of the end of their war effort.

Speaking on the 50th anniversary of the Battle of Vimy Ridge, British Brig.-Gen. Alexander Ross famously said, “in those few minutes, I witnessed the birth of a nation.”

For the first time, Canadians began to see themselves as distinct from their political ancestors in Britain and with their own national character and political identity.

Vimy Ridge was a campaign of military brilliance, technological prowess and sheer grit. To be Canadian meant to be strategic, innovative, relentless and of course, tough as nails.

It’s a bit cliche to say these days, but back in 1917, those men weren’t just fighting for themselves and their country. They were fighting for an ideal. They fought for freedom and for our way of life in Canada. They fought to secure a future of stability and opportunity for us, future Canadians.

That’s why Vimy Ridge Day this year is so difficult to appreciate. One hundred years ago, nearly four thousand young Canadians laid down their lives and thousands more were injured at Vimy Ridge.

They fought and died for something that many Canadians today are willing to simply shrug and surrender.

Instead of defending our ancient rights — freedom of association, freedom of movement, religious freedoms and even freedom of speech — we accept heavy-handed, top-down government edicts that frankly make no sense.

Worse, many actively call on their government to take away more of our basic freedoms and to crack down harder on the few Canadians who stand up to our increasingly tyrannical government.

We watch our political leaders put aside reason, wisdom and morality, and we allow them to abdicate responsibility so that unelected “public health experts” can dictate policy.

We have become weak and terrified, hiding in our homes and demanding everyone else be forced to do the same.

Where the Canadians at Vimy Ridge were strategic, today we rely on clunky and ineffective policies. The overwhelming majority of COVID-19 deaths, for instance, are elderly Canadians, and yet, instead of precise policies aimed to protect this vulnerable population, our politicians use blunt instruments and lock down the entire society.

Where Vimy Ridge Canadians were ahead of the pack in terms of innovation and tactics, today we are dead last among our peers when it comes to the vaccine rollout effort. This matches our health-care system in general, which routinely ranks at or near the bottom of the advanced economies.

Canadians today can learn a lot from the Canadian soldiers who once defined our nation’s character through their tremendous grit and determination.