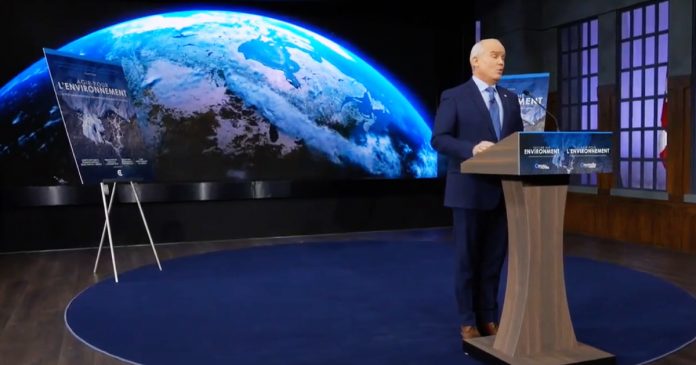 The Conservatives published their 15-page climate plan Thursday, entitled “Secure the Environment: The Conservative Plan to Combat Climate Change.” The policy would roll back the carbon price from $40 per tonne to $20 per tonne, then increase it over time to $50 per tonne.

The Conservative plan continues to tax consumers “each time they buy hydrocarbon-based fuel,” but puts the levy into a “Personal Low Carbon Savings Account,” which taxpayers can draw from to make government-approved green expenditures such as buying a transit pass or electric vehicle or making green home renovations.

Small businesses will be eligible for a similar type of account.

The plan doesn’t definitively lay out how these accounts will be managed, but suggests they could be run by a consortium of financial service providers as Interac is.

“Canadian families and businesses have been trailblazers in the use of affinity or rewards programs and have great expertise in both managing and using them,” the document says.

The Conservatives would maintain a steep price on emissions for large industrial emitters, though the document says the price will be tied to that of the European Union and United States to minimize the risk of jobs shifting to more competitive jurisdictions.

O’Toole said Thursday his proposal is “daring,” but necessary.

“Canada must not ignore the reality of climate change,” he said. “It is already impacting our ecosystems, hurting our communities, and damaging our infrastructure. Canada’s Conservatives will meet our Paris climate commitment and reduce emissions by 2030 to fight climate change and protect our environment. But we won’t do it on the backs of working Canadians or by hurting our economy.”

The Conservatives insist this plan does not maintain a carbon tax because the money collected does not go into government coffers.

O’Toole’s plan would also require that by 2030, zero emission vehicles must make up 30% of the light duty vehicle market. A Conservative government would spend $1 billion to expand electric vehicle manufacturing in Canada, plus an additional $1 billion on “deploying hydrogen technology.”

In a fireside chat with the Independent Press Gallery last year, O’Toole said his plan would let the provinces tackle emissions in their own ways.

“There’s no federal carbon tax. I will eliminate the carbon tax completely,” O’Toole said of his approach last July. “We have to respect what the provinces are doing now…. We need to follow the provinces here because, guess what, they have shared jurisdiction on the economy.”

The new Conservative plan makes repeated mentions of working with the provinces, but does not go into detail on how much autonomy provinces will have within the national framework.

The Conservatives say the Low Carbon Savings Account “will be a national program, but provinces will be able to apply to have a program of their own considered equivalent.”