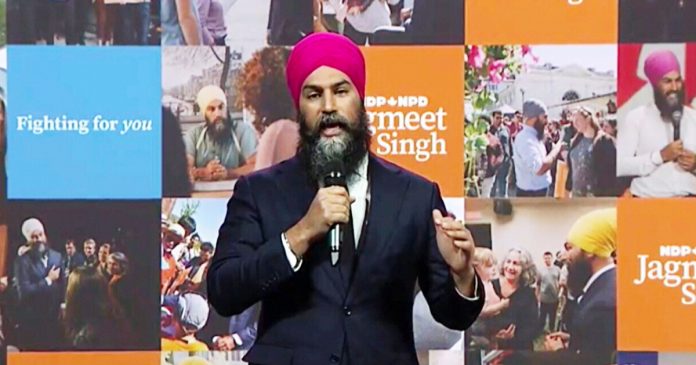 It’s been nearly a week since the NDP concluded their 2021 federal policy convention and the party is still reeling from a number of embarrassing and controversial policy resolutions, including a plan to abolish the Canadian Armed Forces as well accusations of anti-Semitism.

The virtual convention, which took place April 9 to 11, concluded with a number of the resolutions being adopted by the NDP including a plan to introduce a wealth tax on Canada’s millionaires and billionaires.

True North has since parsed through the entire convention to bring you the following six most outrageous highlights.

During a discussion on campaigning during the COVID-19 pandemic, former Manitoba NDP MLA and party Chief of Staff Jennifer Howard suggested that the NDP would “look to replicate” as much of US Democratic President Joe Biden’s campaign as possible when going into the next federal election.

“I remember from the American campaign several really good moments with Democratic candidates like President Biden, Vice President Harris, where you just saw them on a phone talking to a constituent or talking to a volunteer, low tech, not a lot of production. It really was able to communicate an inspirational message to people, but also show that candidate’s connection to somebody and having an actual conversation. So, we’ll look to replicate as much of that as we can,” said Howard.

Far-left treasury candidate complains about party not being radical enough

One candidate running for the NDP’s treasurer position took the opportunity to use the convention as a platform to complain that the party’s current leadership is not doing enough to end capitalism.

Gary Porter, who is also a former board member of the Ontario Teachers Pension Plan, was representing the party’s United Front of Allied Socialists.

“The establishment candidates are pro-capitalist. I think they would agree with me. They want to reform the system piecemeal and leave the capitalists in power. This means any reforms won by working people will be reversed by capital at the first opportunity over the decades,” said Porter.

“The goal of reforming capitalism is unrealistic and forty-five years of neoliberal slash and burn politics have proven that the candidates backed by the United Front of Allied Socialists are anti-capitalist, pro-worker and pro-socialist. We proposed to end capitalism to build a new society with workers and their allies in power.”

Recruiting more women to break down capitalism and patriarchy

Federal NDP candidate for London North-Center and former NDP Women’s Commission Chair Dirka Prout told party members during the second day of the convention that the NDP should be doing more to recruit women to break down capitalism and patriarchy.

“Let’s win more women to socialism through supporting women’s candidates with our fund, educational outreach and mentorship and altering policies to build international peace and solidarity, improve the lives of women and all Canadians while breaking down systems of capitalism and patriarchy,” said Prout.

One party member Alyssa Blank took the opportunity to raise what she called “very scary” hate speech, doxxing and cyberbullying going on in the context of the online convention. Blank did not name any specific instances of online hate.

At one point during the NDP convention’s first day, NDP LGBT Commission Chair Tara Patterson bragged about how the party was able to secure four times as many queer and trans candidates than the Liberals.

Here’s NDP LGBT Commission Chair Tara Patterson giddy about the fact that the NDP recruited four times as many 2SLGBTQ+ candidates as the Liberals did. #cdnpoli pic.twitter.com/zsiwcqOUq9

“We worked hard to recruit to us 2SLGBTQ+ candidates to run in provincial and federal elections across the country. And I’m proud to say that we had 40 queer and trans candidates in the twenty nineteen election, which was four times more than the Liberals,” said Patterson.

During a debate on a policy resolution on combating racism in police and the correctional system, one delegate argued that the policy did not go far enough and that the NDP should be “defunding” police in Canada.

“This amendment doesn’t go far enough. We should be defunding the police,” said the delegate.

One delegate was upset that a policy resolution on combating racism in the police and the correctional system didn’t go far enough in “defunding” the police. #NDPconvention2021 pic.twitter.com/E4s4WUYe9W