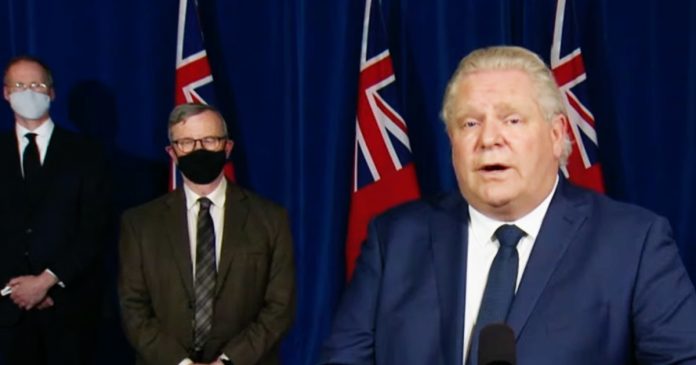 The decision to amend the wording of the regulations after only one day of being in effect comes after a vast majority of the province’s police forces indicated that they do not intend to use the powers granted to them by the government.

Under the amended measure, law enforcement officers are now required to have a “reason to suspect that an individual may be participating in a gathering that is prohibited” before demanding any information from Canadians.

Those who are questioned by police are still required to promptly comply and provide information.

Shortly after Ford introduced the measures on Friday, police forces across the province issued statements online that they would not be randomly stopping people and cars.

“We will not be conducting random vehicle or individual stops. As before, our initiatives will be both complaint driven or proactive, with the goal of gaining compliance. Those that refuse to comply will receive the appropriate penalty,” wrote identical statements by both Niagara and Waterloo region police services.

To date, 42 out of 44 of the province’s police services have indicated that they would not be making use of the powers.

Police officers were not the only ones who took a stand against the order. On Friday, the Canadian Constitution Foundation put out a press release condemning the measures as being equivalent to instituting a “police state.”

“Ontarians are essentially living under a 24 hour curfew and police will now be able to randomly stop people and vehicles and demand an explanation of why people are out living their lives. With these new police powers, Ontario is one step closer to becoming a police state,” said CCF Executive Director Joanna Baron.