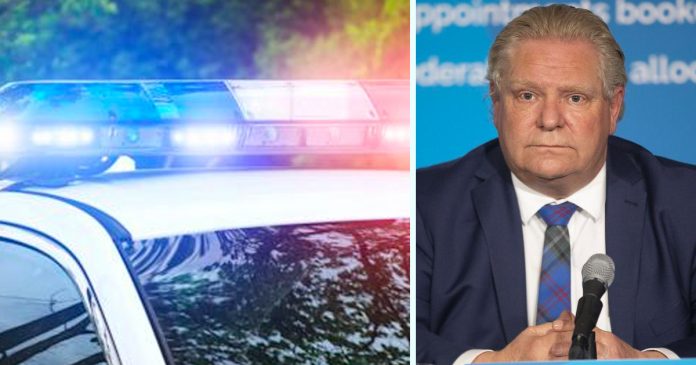 The majority of police services in Ontario say they will not be conducting random lockdown compliance checks despite new powers granted by the Ford government.

On Friday, Premier Doug Ford said police officers will have stop-and-question powers anyone who is outside their place of residence. Individuals stopped by police will be required to give their reason for leaving home.

The move comes as Ontario begins stricter lockdown measures, including a ban on non-essential inter-provincial travel.

Some of the police services that have committed to not using random checks include Toronto, Peel, Ottawa, Windsor, Cornwall, Peterborough and London, among many others.

Both Waterloo and Niagara regional police services put out identical statements saying they will not randomly stop individuals who leave their place of residence.

“We will not be conducting random vehicle or individual stops. As before, our initiatives will be both complaint driven or proactive, with the goal of gaining compliance. Those that refuse to comply will receive the appropriate penalty.” the statements read.

In their own statement, Hamilton Police Services wrote that their lockdown enforcement strategy has not changed.

“Hamilton Police Service members remain committed to providing the highest quality of policing services and want to assure Hamilton citizens that our members will not be conducting arbitrary vehicle and person stops for the sole purpose of enforcing the Stay-at-Home order.”

True North’s Andrew Lawton has been keeping track of all the police services that have defied the Ontario government’s order.

“I’m glad to see police across Ontario say they will not use such an unconstitutional and unfree power, it should never have been given to them in the first place. No jurisdiction anywhere in the world has been able to charge and enforce its way out of the pandemic, so it’s shameful Ontario thinks it can,” Lawton said.

The new powers were immediately criticized by constitutional rights groups and members of the law enforcement community. In a statement on Friday, the Canadian Constitution Foundation said the new police powers combined with ever-increasing lockdowns bring Ontario closer to being a “police-state.”