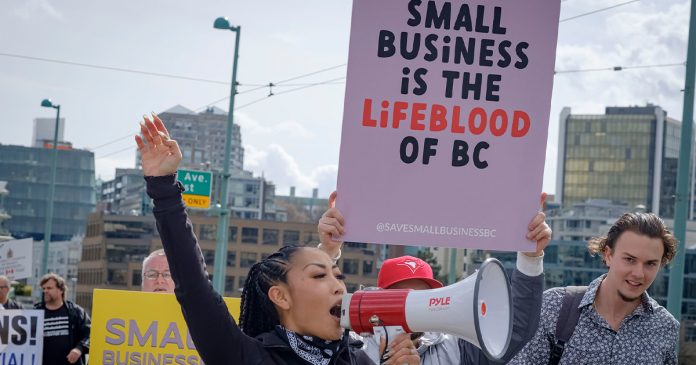 A photo essay by George Douklias

On Friday, April 2, 2021, there was a peaceful protest and march  — an opportunity for many small businesses owners to express their concerns regarding the new COVID-19 safety protocols that the province of British Columbia had recently enforced on many businesses.

BC’s new protocols included (but weren’t limited to) prohibiting indoor dining at restaurants, bars and cafes and restricting indoor training at fitness centres. For many small business owners these new protocols represented a permanent closure of their businesses. When I heard about the new rules, I grew concerned. Though I’m not a business owner and still fairly new to Vancouver, I decided to show my support the only way I knew how — I took pictures. I went to the event with the intent of making a visual record of whatever happened.

I arrived a few minutes early to take in the scene. I witnessed friendly interactions and saw many creative signs that people had made. Some of the people held their signs in view of passing motorists on 12th Ave so motorists could show their support by honking their horns.

There were people of all ages who together represented many cultures, genres and lifestyles.

The march was slated to begin at Vancouver BC’s City Hall at 2:00pm.

As the start of march grew closer, it got harder to move around. I estimated there were roughly 900 people that were all trying to share the space in front of City Hall. When the first round of speeches started, all the attendees gathered in closely as the guest speakers took turns shouting into a megaphone.

They spoke of the costs incurred on them by the government as they complied with restrictions over the last 12 months — lowering the capacity of patrons, setting up plexiglass and some even having to close their businesses as a result of it all.

They spoke of having to lay off employees and not being able to hire them back due to the former employees’ preference to rely on the CERB (Canada Emergency Response Benefit).

They also spoke of the need for unity and encouraged Canadians to not let politics divide us and cautioned us to be considerate of that when using social media. They also expressed the fears that many other small businesses owners currently have — the fear of speaking up about their concerns, the fear of being judged and shamed for expressing opinions and above all — the fear of their businesses going under.

The first round of speakers at City Hall successfully represented the built-up frustrations that the protesters have been harbouring.

The march began by heading north on Cambie St. I stayed towards the front so that I could continue photographing.

People were screaming into megaphones, others shouting with their fists in the air and some were banging on pots and pans as a way of expressing their solidarity with the struggling restaurant industry.

After crossing the Cambie Street Bridge, we hung a left in Granville St. and it was there that I noticed the unity that had been formed amongst the protesters. We were not individuals walking in the same direction anymore, but rather as one body marching towards a unified goal — to save small businesses.

It was there on Granville St. where I heard the true volume of the procession as our marching sounds echoed off the towering buildings around us. Protesters were taking turns leading the march and sharing the use of the megaphones.

For the first time, after a year and a half of living in Vancouver, I experienced the unique and powerful spirit of this city.  And it was during this march, on those few blocks of Granville, St. that I finally became a proud citizen of Vancouver.

The march ended in Yaletown, at the north shore of False Creek, where Davie St. and Marinaside Crescent meet at a roundabout. We all gathered there and listened to another group of guest speakers. This time, their stories were personal.

There was a young man who spoke of his childhood illness, and how his mother cared for him in the hospital while he was on the brink of death. She did that while struggling to build up her dream of owning and operating a dance studio. But she succeeded. He told us that after 18 years of operating, the new province wide protocol restrictions placed on the studio meant that it was on the verge of closing. He said that he owed it to his mother to keep the studio running no matter the cost.

Another guest speaker was a lovely woman named Rebecca, a mother of four and restaurant owner. She told us of her grandparents, which she hasn’t seen in over a year because they reside in a long-term care home. She also spoke of her mother in law, whom she lost to cancer in August of 2020. Rebecca also spoke of her son with cystic fibrosis who’s been labeled high risk, and that several of her family members are currently suffering with mental health issues.

She learned her restaurant in Kitsilano is being forced to close due to the new provincial protocols. Over the last twelve months, she’s had to pay full price for her permits and licenses while her restaurant’s capacity and hours have been cut in half. During Rebecca’s speech, she pointed out the media’s shameful promotion of death and fear while ignoring nutrition and exercise or other ways to build a healthy immune system. Rebecca concluded by declaring that she was going to defy the government’s orders by keeping her restaurant open for indoor dining and invited all protesters to her restaurant. She finished her speech by encouraging other business owners to do the same.

The other guest speakers spoke in a similar manner — many business owners who have incurred many costs and constraints over the last 12 months but are fed up with complying with the contradictory regulations placed on their businesses. Many of these businesses are on the verge of closure because of the province-wide protocols.

Then when it was all over, and people started to disperse, I was left with many mixed feelings.

On one hand, I felt so proud to be a new resident of this amazing city, but as I walked away from the roundabout, I carried with me a feeling of concern — concern for the well-being of all these inspiring people.

Over the previous winter, I’d been hoping to experience a great summer in Vancouver, the best summer I’ve had in a long time, but I’m afraid it’ll be a summer of uncertainty and struggle.

I’m so glad that I attended this protest. I’ve been inspired beyond my expectations. And I truly hope that my photos can help in some way, but I know that I didn’t need to hear them talking about their dire situations to have been inspired by them. I’m sure that if I’d met them at a jazz club or at one of those Vancouver street parties that I’ve only ever heard about, or as a simple patron in one of their businesses, I would have been just as inspired by them there as I was on that day of the protest.

These people carry within them the spirit of the city and though I’m glad to have witnessed this spirit come alive that day, I would have much rather experienced it during any other circumstance.