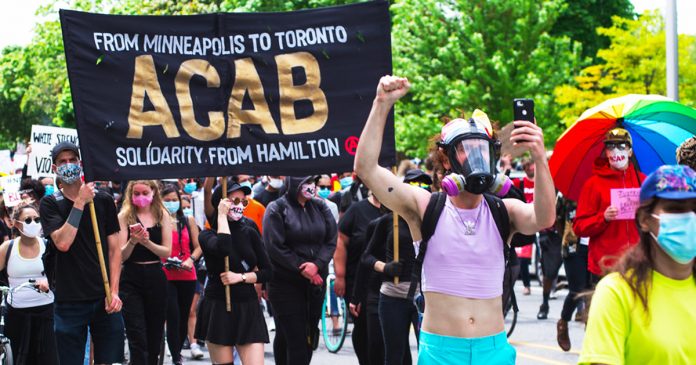 A True North review found that 15 of Canada’s largest cities and towns have made a declaration in some form or another that they are systemically racist institutions.

Numbered among them are Toronto, Vancouver, Montreal, Ottawa and dozens of others.

According to the Office of the United Nations High Commissioner for Human Rights, “systemic racism” is defined as “an infrastructure of rulings, ordinances or statutes promulgated by a sovereign government or authoritative entity, whereas such ordinances and statutes entitles one ethnic group in a society certain rights and privileges, while denying other groups in that society these same rights and privileges because of long-established cultural prejudices, religious prejudices, fears, myths, and Xenophobia’s held by the entitled group.”

This report only looked at explicit admissions of systemic or institutional racism by municipal governments and took into account mayoral statements, comments made by city representatives in the media, documents and statements made on official webpages.

All of the cities and towns included in the list have a population of 100,000 people or more.

When taking into account the latest census data, the cities included in the following list represent over 11 million Canadians or nearly 29% of Canada’s population.

“Here in Toronto and around the world, people have been raising their voices and calling for an end to racism generally, to anti-Indigenous and anti-Black racism, and to racism against marginalized communities,” Tory said.

“As Mayor, I acknowledge that, despite our city being one of the world’s most diverse, systemic racism continues to be a real issue here in Toronto and there is much more all of us can do to confront it and to eliminate it.”

“Starting today, at city council, I will propose a statement to recognize the systemic nature of racism and discrimination,” said Plante.

“To affirm the city’s solidarity with the thousands of citizens who have denounced racism and discrimination in all its forms and, above all, to reaffirm our commitment to act and to put in place the necessary measures to fight them.”

According to a July 7, 2020 meeting of Calgary’s Community and Protective Services committee, councillors and Calgary Mayor Naheed Nenshi carried a motion that acknowledged the existence of systemic racism in the City of Calgary.

“At the City of Ottawa, we are committed to incorporating equity, diversity, and inclusion in the way we deliver services and we want all residents to feel heard, seen, and well served. We recognize systemic racism exists and it is our duty as public servants, members of the community, and as human beings to work together in the fight against systemic racism.” Ottawa’s Anti-Racism and Ethnocultural Relations Initiatives page writes.

“In the past year, the City has implemented new anti-racism measures, including committing a budget to create an Anti-Racism Secretariat to address systemic racism in our community and within the City’s workplaces and services.”

“We are in a pivotal moment right now and it is incumbent on all institutions, including the City of Mississauga, that we take action to address racism and discrimination,” said Mississauga Mayor Bonnie Crombie.

“To be good on the outside, we must be good on the inside. It is important that our institutions are representative of the people they serve and that everyone is treated fairly and with respect, free from bias and discrimination. Today’s motion commits the City as a corporation and a community to confronting racism and discrimination, and in particular anti-Black racism and discrimination, and take meaningful action. Our work to confront these challenges is never done, but I am confident that by working with Council, city staff, and the broader community, we can take significant steps forward.”

A motion that was carried on July 15, 2020 by Winnipeg’s city council acknowledged that “systemic racism” existed in the city and that the city would “address racism and discrimination in Winnipeg and work to eliminate inequities through education, public awareness, and leading by example.”

Vancouver: City recognizes its “foundation” is based on racism, white supremacy

We are humbled by the continuous efforts and action of the communities most impacted by systemic racism.

“Systemic racism does exist. We need some Black people, some Muslims, we need some people from First Nations,” said Quebec City Mayor Regis Labeaume in response to a report on policing.

During a July 8, 2020 meeting, Surrey’s city council voted to carry a motion by the Social Equity and Diversity committee acknowledging that “acknowledged that systemic racism exists in Surrey and its civic institutions.”

Halifax: Mayor says city has “a history of systemic racism”

“I want to take a moment as we begin Council to address the issue of anti-Black racism and the events of the past couple of weeks. Anti-Black racism includes policiesand practices embedded in our institutions that reflect and reinforce beliefs, attitudes, prejudice, stereotyping and discrimination. It is directed at people of African descent and rooted in their unique history of enslavement and colonization,” wrote Halifax Mayor Mike Savage in a June 9, 2020 statement.

On June 16, 2020, London’s city council passed a motion which acknowledged that “systemic anti-Black, anti-Indigenous and people of colour racism exists in London” and that the city’s “workforce is not reflective of the population it services and that it will continue to work to ensure a reflective workforce.”

“The time for us to prioritize issues facing Black Canadians is now. As we confront anti-Black racism, we are taking immediate and proactive steps to fight and prevent systemic racism in our decision-making, programs and services,” said Markham Mayor Frank Scarpitti.

“Recognizing that more needs to be done to combat anti-Black racism, promote equality and to support diversity and inclusion, Markham Council has unanimously endorsed a Strategy to Combat Anti-Black Racism.”

Guelph: Systemic racism is a “reality” in the city

According to the City of Guelph’s website, the city began a consultation process in July 2020 to address those “most affected by systemic racism in Guelph.”

“Initial conversations also identified a foundational need to use data to better understand the realities of systemic racism in Guelph,” wrote the City of Guelph.

Ajax: Town has “a lot of work to do” to address systemic racism

“The recent Black Lives Matter movement and protests reminded the Town and Ajax Council that we have a lot of work to do in addressing systemic and institutional racism to combat barriers felt by Black people,” wrote Ajax’ Anti-Black Racism Task Force webpage.

Representatives from Thunder Bay and surrounding communities joined 11 major organizations on June 19, 2018 to declare in a public statement that systemic racism exists within the city.