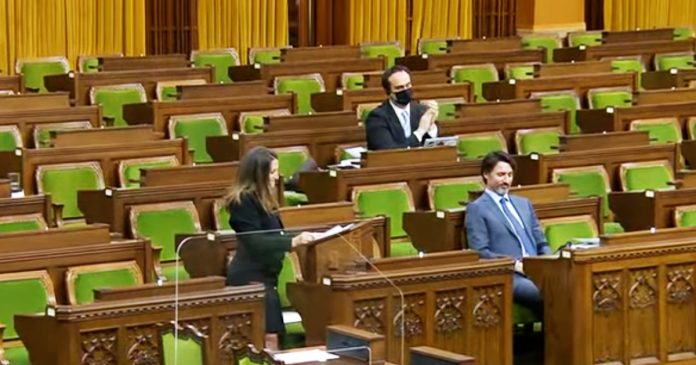 The Liberal government unveiled over $100 billion in new spending in its first federal budget since 2019.

Included in the lengthy budget was a series of new measures meant to aid recovery from the COVID-19 pandemic, including a $30 billion investment towards developing a national child-care plan and over $17 billion in environmental spending.

Tory leader Erin O’Toole criticized the government’s rampant spending, saying Canada needs to get its economy back on track with balanced books.

“We need a plan to get back to fiscal balance,” said O’Toole in a press conference on Monday.

“The Conservatives have a plan to do that over the next decades, so we don’t burden our children and grandchildren with out-of-control debts. That’s what seems to be Mr. Trudeau’s intention. We’ll see if there’s any sort of plan for balance today.”

“This budget is a smart, responsible, ambitious plan for jobs and growth, that is designed precisely to heal the specific wounds of the COVID-19 recession and to permanently strengthen Canada’s economic muscle,” Freeland said.

Part of the 2021 budget includes a $12 billion extension to COVID-19 aid programs meant to help small businesses suffering as a result of the pandemic. Meanwhile, the Liberals also hope to extend COVID-19 rent and wage subsidies which were supposed to expire this June.

The Liberals also proposed a new tax meant to target Canada’s ultra-rich. The tax would apply to the sales of luxury cars, boats and personal jets meant for personal use.

Other taxation measures include a possible tax on vaping products and mention of an increase to excise duties by $4 per carton on tobacco products with the hope of generating $2.1 billion in revenue over five years.

The Liberals also proposed a Digital Services Tax applicable to 3% “on revenue from digital services that rely on data and content contributions from Canadian users.”

Currently, the federal debt is expected to cross the $1.3 trillion mark.