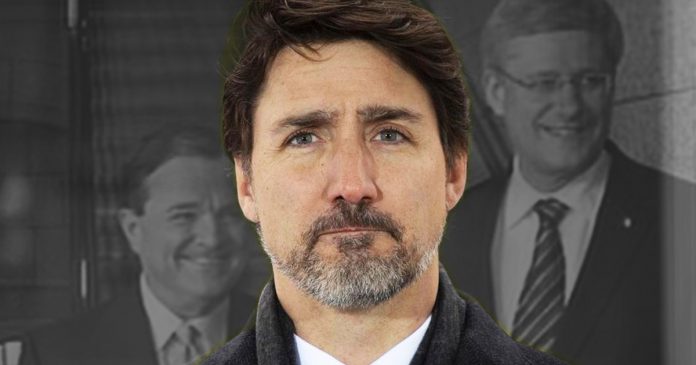 Following the presentation of the 2021 budget in the House of Commons, Prime Minister Justin Trudeau claimed in a press conference that the former Conservative government of Stephen Harper had “cut support” too quickly during the 2008 recession.

A True North review of federal spending programs from 2008 and 2009 found Trudeau’s statement to be misleading.

“In the last year we promised to have people’s back through this crisis. That means protecting you and your family. It also means making the right investments on what comes next,” Trudeau told reporters.

“We remember what happened when the previous government cut support too quickly during the great recession of 2008. We won’t be making that mistake. This budget lays out a plan for good middle-class jobs and a clean resilient economy that works for everyone.”

Trudeau’s claim rests on two points: that the Harper government had cut financial and economic support to Canadians and that it happened too soon. In reality, the Harper government massively increased spending to support Canadians through the crisis and introduced the multi-year Economic Action Plan which has been described by experts as “one of the largest stimulus packages among affluent OECD countries.”

In 2008, the Harper government introduced spending on numerous public services and supports for Canadians including the then-newly-created Tax-Free Savings Account to ensure lower and middle income Canadians could keep more of their money in their pockets.

Additional support for students was also introduced in that year’s budget, including a $350 million investment in the Canada Student Grant Program, as well as $28 million in new scholarships for both Canadian and international students.

In terms of investments into science and the environmental sector, in 2008 the Conservatives dedicated $250 million for research into developing greener and more fuel-efficient automotive technology. Additional investments were also made to improve environmental protection, with $10 million being allocated to Natural Resources Canada.

As for 2009, while the rest of the world was reeling from the financial crisis, the Harper government introduced several stimulus measures into the budget to help Canadians weather the storm.

Part of Harper’s stimulus plan included an $8.3 billion investment to the Canadian Skills and Transition Strategy with an additional $20 billion in personal income tax relief that year. The Conservatives also funelled $7.8 billion in order to stimulate the housing market, including an additional $12 billion in infrastructure funding.

In fact, the Conservative government’s Economic Action Plan (EAP) stimulus spending made up 1.9% of Canada’s GDP in 2009 alone.

One of the major income supports provided to Canadian workers during the 2008 crisis by the federal government was a two-year $500 million investment to extend Employment Insurance (EI) benefits for workers involved in long-term training as well as expanding the time duration of entitlements workers could receive through EI. Changes to the EI program also included lowering eligibility requirements so more Canadians could receive assistance.

With regard to support for Canada’s First Nations, the Harper government dedicated an additional $1.4 billion to Aboriginal issues on top of the  $10 billion the government was spending at the time annually.

The EAP remained in effect for two years until 2011 when even the US had regained its pre-recession GDP levels. In comparison, the Liberal government’s pandemic spending programs have only been in effect since the Canada Emergency Response Benefit was introduced in March 2020.

Cuts to programs did begin around 2012, at a time when the Canadian economy was recovering. As it ended its stimulus program, the Harper government returned to its fiscal roots and slashed funding to the Canadian Conference of the Arts, the Canadian Foundation for Climate and Atmospheric Sciences and several other government programs and public sector agencies.

Given that Harper’s generous stimulus programs were in effect for a significantly longer time period than the current government’s COVID-19 emergency measures, it is misleading for Trudeau to claim that the Harper government had cut support “too soon” at a time when many countries had already experienced recovery from the recession.