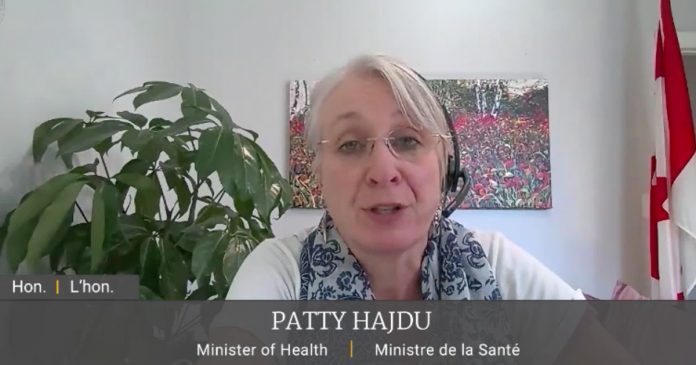 Liberal Health Minister Patty Hajdu claimed in the House of Commons on Thursday that Vitamin D supplementation as an additional preventive measure against COVID-19 infection was “fake news.”

Hajdu made the comments in response to a question posed to her by Independent MP Derek Sloan on why Health Canada is not actively recommending Canadians to take the supplement.

“At least 75 recent studies show that optimal Vitamin D levels significantly reduce susceptibility to COVID-19 and significantly improve health outcomes if people do get infected. It has been documented for decades that Canadians have suboptimal Vitamin D levels, especially during winter. Can the minister explain why Health Canada’s website states that most Canadians are getting enough Vitamin D and doesn’t actively recommend supplementing,” asked Sloan.

“I would encourage the member opposite to not fall prey to the myriad of fake news articles that are circulating around the internet about ways that people can protect themselves from COVID and trust that the Public Health Agency of Canada only puts science-based credible documents up guided ofcourse by our Chief Public Health Officer Dr. Tam and the many scientists that work for us,” said Hajdu.

“What Canadians need now is trust and they need to be able to trust in the information that their elected officials are sharing and I would urge the member to get his sources from credible sites.”

Contrary to Hajdu’s insinuation that “credible sites” have not discussed Vitamin D as a preventative measure, numerous Canadian mainstream news outlets have published features highlighting research into the supplement.

For example, since at least 2020, CTV News has published a handful of articles highlighting Vitamin D research.

One article dated October 27, 2020 was titled “More than 80 per cent of hospitalized COVID-19 patients had vitamin D deficiency: study,” another article from March 21, 2021 was called “High vitamin D levels may protect against COVID-19, especially for Black people: study.”

Canada’s own public broadcaster, the CBC, has also published numerous pieces which explore Vitamin D as a potential treatment for COVID-19.

While the US government has not explicitly recommended the use of Vitamin D as a preventative measure or treatment of COVID-19, the US National Institute of Health has noted that insufficient data exists to recommend “either for or against” its use.

Other countries’ health departments, like the UK’s National Health Service recommends people take 10 micrograms of vitamin D a day during the winter months for general health reasons but also notes that more data is needed to determine its ability to prevent or treat COVID-19.