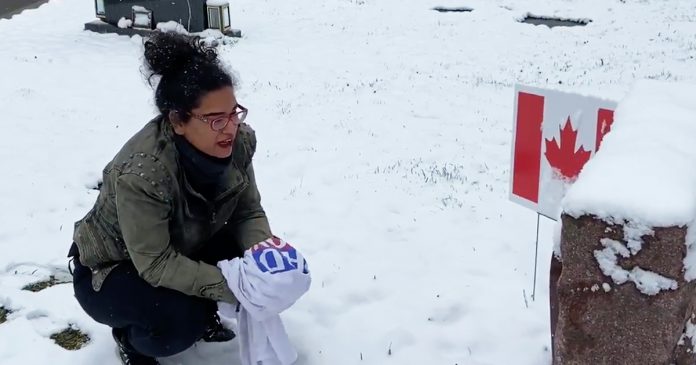 An Ontario lawyer posted a video to Twitter showing her kneeling at Rob Ford’s grave, asking him to send his brother, Ontario Premier Doug Ford a “sign” regarding his handling of the COVID-19 pandemic.

In the nearly two-minute-long clip tweeted Wednesday, Caryma Sa’d kneeled at the late Toronto mayor’s headstone and lays out what she sees as the Ontario premier’s failings as a leader.

“Hey man,” Sa’d says to the headstone. “You and I don’t know each other. I know of you. Larger than life. And I have been to your mom’s house. In fact, I was at your mom’s house for FordFest a few years ago. I watched your brother come down the stairs to Eye of the Tiger. And I didn’t know then what was to come.”

Sa’d says in her soliloquy that Ontario’s COVID-19 fatalities have been “totally preventable” and takes aim at the expanded police powers the province announced on Friday (which were reversed the day following due to backlash from the public and police agencies).

She also laments that there’s been no talk of sick days from the province, despite Doug Ford being in self-isolation after a staff member tested positive for COVID-19.

Sa’d said in her video that COVID’s death toll justifies her politicization of Ford’s grave.

“There are people who will criticize me for being here, saying that death is sacred. But how sacred is it really in a province that has seen 7,700 people die from COVID-19, in ways that were totally preventable,” says Sa’d before discussing Ford’s latest emergency measures.

“Anyway, I don’t know if you’re still in communication with him and I don’t know how much you would care, to be honest. But send him a sign because the situation is not tenable.”

True North reached out to both Sa’d and Doug Ford’s office but did not receive a response by the time this article was published.

At the end of the video, Sa’d lays a “Ford Nation” t-shirt at the headstone as the camera focuses on the headstone’s inscription.

Rob Ford is buried at Etobicoke’s Riverside Cemetery. He died in 2016 after a battle with cancer.