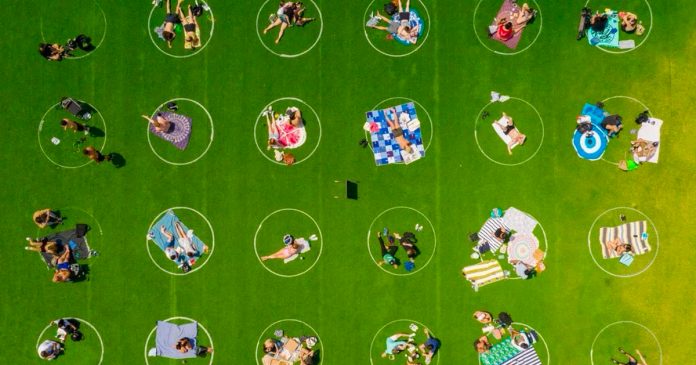 Trinity Bellwoods Park will once again be covered in paint circles to encourage visitors to remain socially distanced.

The City of Toronto says the “physical distancing circles” will be painted onto the grass of the popular park next week to give people the opportunity to be outside.

“While there is currently a province-wide stay-at-home order in effect, the city recognizes that many residents living in apartment buildings and condominiums who do not have yards need spaces to get exercise and fresh air in city parks,” the city said in a statement.

“Trinity Bellwoods Park is a popular location for many downtown residents and the painted physical distancing circles will help keep people safe while using the park.”

With Ontario under a stay-at-home order, residents are discouraged from going outside for recreational purposes. The order allows for members of the same household to gather outside.

Physically distancing circles were used at Trinity Bellwoods last year when the park was overrun with Torontonians eager to get a break from the previous stay-at-home order.

Previous studies have indicated that it is extremely rare to contract coronavirus while outside. While authorities asked anyone who visited Trinity Bellwoods last May to monitor themselves for symptoms, it is unclear if any cases were traced back to the park.

Last May, Toronto Mayor John Tory was photographed in Trinity Bellwoods while not social distancing and wearing a mask incorrectly. Ironically, Tory claimed he visited the park to judge if residents were following public health orders.

The City of Toronto asks residents to check out other city parks instead to avoid overcrowding Trinity Bellwoods.

“If a park or amenity such as a playground is crowded, people should visit another park or return at another time,” the city said.