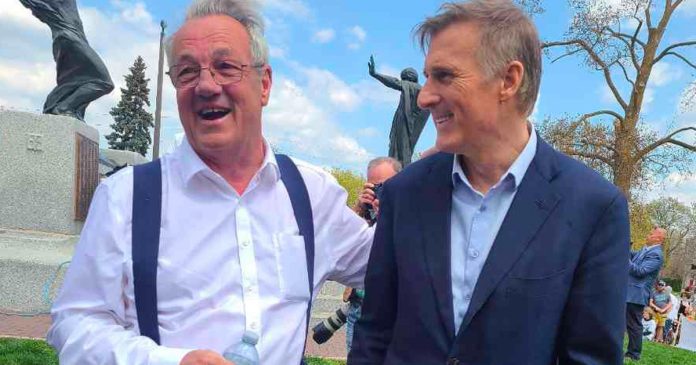 On Saturday, People’s Party Leader Maxime Bernier and Independent Ontario MPP Randy Hillier were joined by hundreds of people at a protest organized by the group No More Lockdowns Canada in Confederation Square in Peterborough.

Bernier and Hillier both received tickets from police during the large anti-lockdown rally.

A total of 8 people were ticketed at the event, three for violations of the Reopening Ontario Act and five for different violations.

Speaking to the crowd, Hillier said he would risk getting tickets as he needed to continue protesting lockdowns.

“We will not stand down — we will stand for freedom and no more lockdowns.”

Hillier also got into a heated discussion with Peterborough Police Chief Scott Gilbert in Confederation Square.

The day before, Gilbert told reporters that Peterborough police were prepared to charge people at the protest but acknowledged that charging everyone would have been impossible.

Hillier and Bernier have travelled across Ontario in recent days to headline protests against the Ford government’s latest lockdown measures.

Protests against lockdowns in Ontario were held across the province on the weekend, including in Toronto, Hamilton and Barrie.