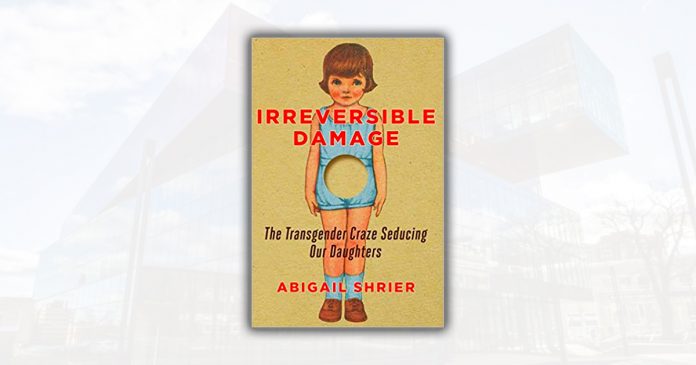 LGBTQ activists and some concerned parents are hoping to force Halifax Public Libraries to censor a book that’s skeptical of transgender ideology from its shelves because they see it as being “dangerous” and “transphobic.”

The book in question was written by author Abigail Shrier, and is titled “Irreversible Damage: The Transgender Craze Seducing Our Daughters.”

Since its publication, Shrier’s book has been listed as one of the best books of 2020 by The Economist and has received other similar reviews from mainstream publications.

One parent named Nicole Nascimento claimed in a Facebook post that the book risks “the lives of trans youth simply for the sake of intellectual freedom.”

This week, a petition titled “Transgender Identity is not a choice, a Craze, or a Fad” was launched online demanding that the library censor the book and author for alleged “hateful messages.”

“I don’t believe the library should be a place of neutrality, and it should stand up to hate speech. I would like that book removed because I genuinely think it’s dangerous—which is a complicated thing to talk about when it comes to books,” said the petition creator Mila McKay.

“I’m not talking about censoring books. She can promote her book. She can continue to promote herself. It wouldn’t be silencing her. This isn’t a freedom of expression issue. This is an issue about a very dangerous narrative that can confuse parents by giving them unscientific information, and because of that, it can endanger the lives of trans youth.”

Halifax library’s manager of collections Dace MacNeil addressed McKay’s concerns saying that the book’s contents do not “constitute hate speech” and that the library supports having a wide range of opinions.

“While the author’s arguments and the research methods are questionable, and there is understandable concern that the advice provided in this book is not trans-affirming, the content does not constitute hate speech in the Canadian legal context,” said MacNeil.

“Supporting a collection that reflects a wide range of perspectives, including books that express views many of us take objection to, is the foundation of a public library and foundational to a democratic society.”

“I won’t apologize,” Peterson refuses to back down after suspension on...