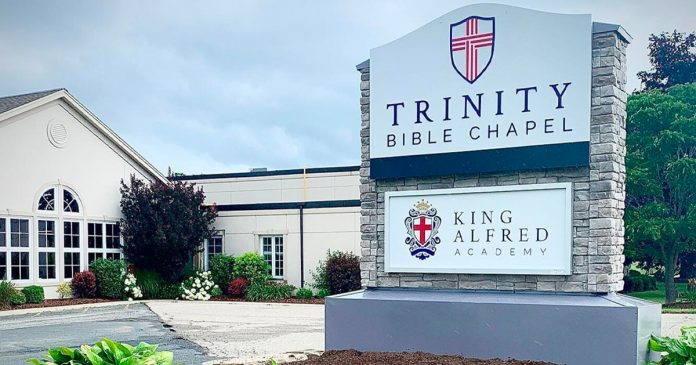 The Ontario government has locked a southwestern Ontario church’s doors after being granted an injunction in court.

On Friday, the court authorized a request from Ontario’s attorney general to shutter Trinity Bible Chapel over to prevent the congregation from meeting in-person on Sunday.

Officials used a locksmith to ensure no one from the church could access the building, forcing  Trinity Bible Chapel to hold its May 2 service online.

Worship services in Ontario are capped at 10 people under the province’s stay-at-home order.

Police allege the church hosted illegal gatherings in violation of the lockdown restrictions on Jan. 22 and Apr. 16.

“A court granted the Province of Ontario the authority to take our facility, at least until next Saturday, with the option of trying to get it for longer by going to court once again this coming week,” Pastor Jacob Reaume said in a statement.

Reaume said the injunction and previous fines will not stop the church’s activities, adding that they will accept any kind of punishment the government gives.

“The purpose of this seizure is to prevent us from meeting as a church. They believe that we will continue meeting in our facility, no matter the fines or the public shame heaped on us,” he wrote.

“We are willing to pay any price necessary to worship our Saviour because He is worth it. He died for us, and we want Him to receive a reward for His suffering.”

A spokesperson from the attorney general’s office confirmed the court order.

“The Court granted interim relief in the form of an Order directing the Sheriff to lock the doors of the Church on a time limited basis. The doors were ordered to be locked, before midnight May 1, 2021, for one week,” the spokesperson told True North.

The government had previously sought an order to close the church in April but this injunction was denied.

The Trinity Bible Chapel and the government will return to court later in the week as the court determines whether the building will remain locked next Sunday.