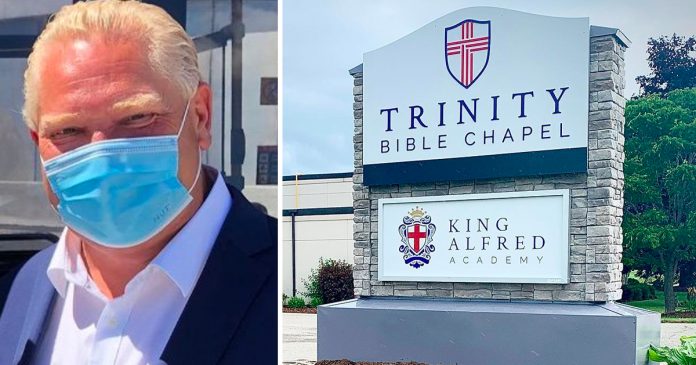 An Ontario judge has extended an order locking the doors of a southwestern Ontario church.

Under the new order from Justice John Krawchenko of Ontario’s Superior Court of Justice, the Trinity Bible Chapel in Waterloo Region will be indefinitely locked out of its building.

At a virtual hearing Thursday afternoon, Krawchenko found that the circumstances under which he ordered the Trinity Bible Chapel’s doors to be locked last week have not sufficiently changed to justify amending the order.

“It is clear that there are no changes in circumstances either in the pandemic or in the position of the respondents that would require any modification to my previous order,” Justice Krawchenko said.

Trinity Bible Chapel’s pastors and congregation will remain locked out of their church until the court can schedule a sanctions hearing, or the Ontario government’s restrictions ease to allow worship services with 30% of building capacity, whichever comes sooner.

Sheriffs changed the locks on the church building Saturday after Krawchenko granted Ontario’s attorney general an injunction, which was set to expire this weekend.

In an interview on The Andrew Lawton Show, Pastor Jacob Reaume says his church has received approximately $50 million worth of fines for continuing to have services authorities allege to be illegal.

A lawyer for Ontario’s attorney general said continued church services with attendance above the province’s 10-person limit cause “irreparable harm” to public health and the rule of law.

“Liberal democracy ceases to function without limits on the state’s power,” Bildy said in her submission. “Democracy without inalienable, individual rights is nothing more than tyranny by the majority. It’s mob rule.”

In an email to True North, Bildy said the decision has implications far beyond Trinity Bible Chapel.

“Locking the doors might indeed keep Trinity’s parishioners from coming together for worship at church, but it is also a symbolic blow to our liberal democracy which is supposed to protect individual rights and freedoms from state overreach,” she said. The government gave itself the power to pick winners and losers, to restrict the ability of its citizens to interact with one another in normal ways, and to punish harshly those who don’t fall in line. That should be troubling to more of us than it is. “

Krawchenko pointed out in his decision that Trinity Bible Chapel remains unwilling to abide by the Ontario government’s restrictions.

“(Trinity Bible Chapel) conceded that there was no real middle ground, and further in response to my earlier query on whether part of the physical building could be opened it was apparent that this was not a workable alternative,” he said.

Justice Krawchenko said the constitutional questions must be tried at a later date, rather than on the interim basis for Thursday’s injunction hearing.

Bildy said the Ontario government has yet to prove in a court of law that its “unprecedented lockdowns” are justified, and she and Trinity Bible Chapel intend to put the burden of proof on the province.