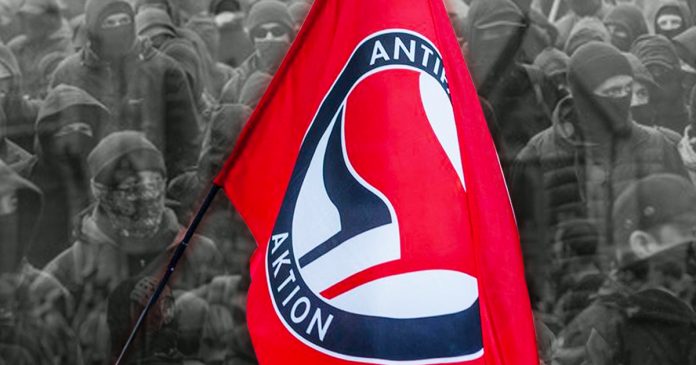 The Trudeau Government failed to consider any violent left-wing protest groups associated with urban riots and bombings when compiling its annual list of banned terrorist groups, True North has learned.

According to a new document exclusively obtained by True North, the Department of Public Safety did not provide any records to the Minister on a long list of Antifa-affiliated groups who operate in Canada.

Antifa is a violent far-left movement whose followers organize riots and openly call for violence against anyone they believe is a “fascist” — a broad and ill-defined classification that has included veterans, police officers, security guards, military personnel, store owners, journalists, conservatives, Trump supporters and anyone who isn’t adequately woke.

Antifa members have been arrested in cities across North America and Europe for the destruction of property, arson, uttering threats, assault, incitement and even murder.

The group dubs itself “anti-racist” and “anti-fascist,” and because they occupy the far-left end of the political spectrum, they often fly under the radar and do not receive the same attention and condemnation from journalists, academics and politicians as violent groups on the far-right.

As for the Trudeau Liberals, records show that Antifa and its violent rallies are not even worth studying.

An access to information request asked the government to “provide any memos, briefing notes, policy briefs and other similar documents provided to the Minister relating to the possible placement of the following groups on the Criminal Code list of terrorist entities.” The request lists more than a dozen Antifa groups that are known to operate in Canada.

“A thorough search was conducted and Public Safety Canada was unable to locate any records responding to your request,” wrote a manager with Access to Information and Privacy in response to the request.

One of the groups listed in the request, Résistance Internationaliste, claimed responsibility for a number of bombings between 2004 and 2010, with targets including an oil and gas executive in Montreal and a Canadian Forces recruitment centre in Trois-Rivières.

Another group, Hamilton Against Fascism, has been involved in a number of violent attacks that have led to many arrests. In late 2018, ring-leader Cedar Hopperton pleaded guilty to mischief over $5,000 and counseling to commit mischief after he led a riot that caused significant property damage.

Hopperton was described as the “ringleader” of a group of some 40 masked anarchists who attended what they described as a “militant and confrontational march.”

Likewise, the group Toronto Against Fascism has been linked to violent rallies, including one outside a Munk Debate at Roy Thomson Hall in November 2018. According to Toronto Police, 12 people were arrested during that rally after police officers were assaulted. “One officer hit with a stick, another punched in the face,” noted a tweet from Toronto Police Operations.

Several other Antifa affiliated groups, including Youth Liberation Front, Redneck Revolt Socialist Rifle Association and By Any Means Necessary, all have a long rap sheet of violence at their street marches in the U.S., and yet, none were examined by the Minister of Public Safety.

The Trudeau government has been accused of politicizing the terrorist watch list, first removing the term “Sikh extremists” so as not to offend Khalistani activists in the Liberal base, and then going even further to remove the terms “Sunni” and “Shia” when describing radical Islamist terror groups.

Trudeau’s terrorist report included a large section on “right-wing extremism,” but does not so much as mention “left-wing” groups — this despite the growing menace of Antifa and violent left-wing urban riots.