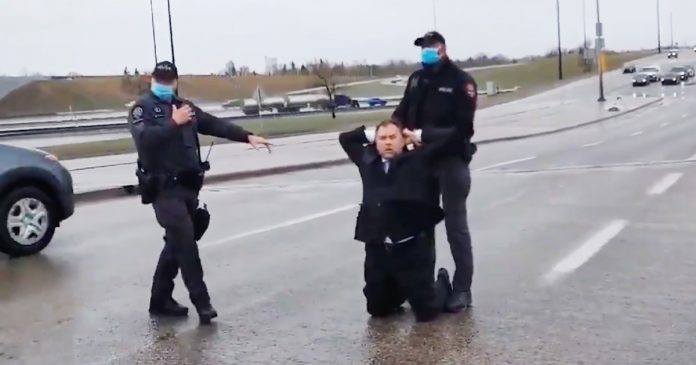 On Saturday, Pastor Pawlowski and his brother Dawid were charged with organizing and attending an illegal in-person gathering earlier in the day.

In a video posted to Facebook, Calgary police pulled over the brothers’ vehicle immediately after the church service and took them away in handcuffs. Several police cars and officers can be seen surrounding the vehicle.

Artur Pawlowski is pastor of the Cave of Adullam congregation in Calgary and a longtime street preacher. He has opened his church multiple times in defiance of the province’s limits on in-person worship.

In April, a video of Pawlowski kicking Calgary police out of his church on Easter made international headlines.

The arrests come after Alberta Health Services received a pre-emptive injunction to stop various gatherings and rallies that violate public health orders across the province.

Police used the same injunction to physically close the Whistle Stop Café in Mirror, Alta. earlier in the week for violating the orders of the Chief Medical Officer of Health

In a statement, Calgary Police Services (CPS) claim the Pawlowskis were aware that they were in violation of restrictions but held services anyway.

“The service organizer acknowledged the injunction, but chose to ignore requirements for social distancing, mask wearing and reduced capacity limits for attendees, and continued with the event,” CPS said.

“As we find ourselves in the midst of a global pandemic, we all must comply with public health orders in order to ensure everyone’s safety and wellbeing.”