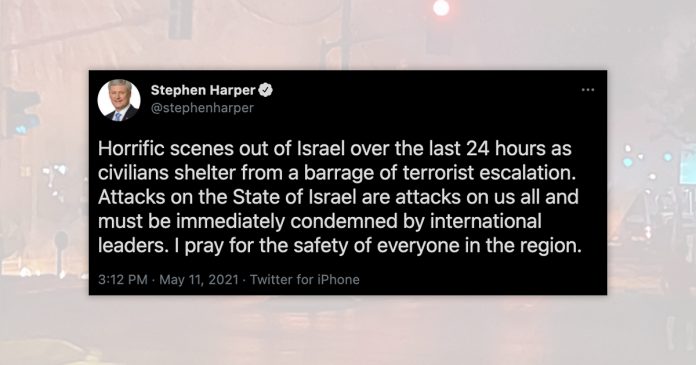 Former prime minister Stephen Harper has condemned the terrorist group Hamas for launching hundreds of rockets at Israel in a new wave of aggression.

Harper took to Twitter Tuesday to condemn the unprovoked attacks on Israel which have resulted in multiple civilian deaths.

“Horrific scenes out of Israel over the last 24 hours as civilians shelter from a barrage of terrorist escalation,” he said.

“Attacks on the State of Israel are attacks on us all and must be immediately condemned by international leaders. I pray for the safety of everyone in the region.”

On Monday, Hamas began firing rockets into Israel from its the Gaza strip. At least five Israelis have thus far killed, with Israel retaliating with airstrikes that have killed at least 15 Hamas militants.

The rocket attacks began after weeks of clashes between Israeli police, Palestinian groups and Jewish groups over control of a disputed neighbourhod in Jerusalem.

While Harper condemns the attacks on Israel, the current Liberal government has remained quiet as the situation escalates.

As of Tuesday evening, Prime Minister Justin Trudeau had not made any public statements on the rocket attacks or previous clashes in Jerusalem.

While Trudeau has remained silent, Foreign Affairs Minister Marc Garneau did issue a statement on the clashes in Jerusalem on Saturday, calling for both sides to back down.

Garneau noted his government is concerned that Israel’s claim to the disputed neighbourhood may undermine the possibility of a two-state solution.

“Canada is following the situation in Jerusalem closely. We call for immediate de-escalation of tensions and for all sides to avoid any unilateral actions,” he said.

“Canada is committed to the goal of a comprehensive, just and lasting peace in the Middle East, including the creation of a Palestinian state living side by side in peace and security with Israel.”