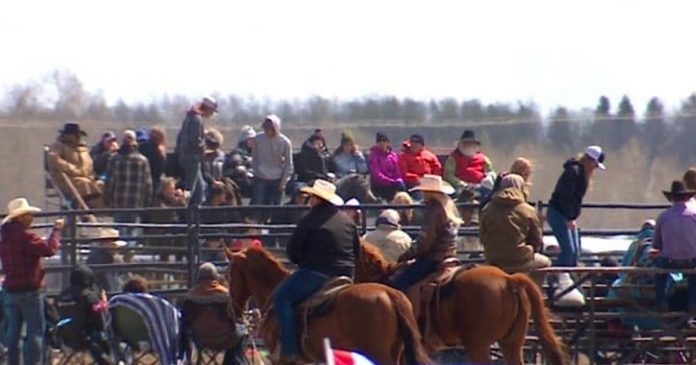 A rodeo held in protest of lockdowns in Alberta has not resulted in any new cases of COVID-19.

In a statement, Alberta Health Services (AHS) wrote that no cases have been associated with the event but warn it is still possible spread may have occurred.

“AHS has worked with RCMP, the Bowden Agriculture Society and Red Deer County to confirm the rodeo event was in violation of CMOH Orders, and attempted to work with organizers proactively to not allow the event to proceed,” AHS said.

“At this time there are no cases directly linked to the rodeo event; however it is important to remember that symptoms may take up to 14 days to appear after exposure. In some cases, symptoms may be mild and individuals may not seek out COVID-19 testing.”

On May 1-2, approximately 4,000 people gathered on private property in rural Red Deer County to hold the No More Lockdowns Rodeo Rally. The event was hosted entirely outdoors. In the past, public health experts have indicated that the spread of COVID-19 is rare outdoors.

The rodeo was harshly attacked by Alberta Premier Jason Kenney, calling the event disturbing and its attendees “selfish.”

Following the rally, the organizers of the rodeo Ty and Gail Northcott were charged with violating the Public Health Act. The couple are due to appear in court on May 17.

The Northcotts are a multi-generational rodeo family that have owned a ranch near Bowden, Alta. since the 1980s.

On May 6, a court gave AHS a preemptive injunction to stop various gatherings and rallies that violate public health orders across the province. The injunction effectively prevents such events from being held in the future without an immediate response by law enforcement.