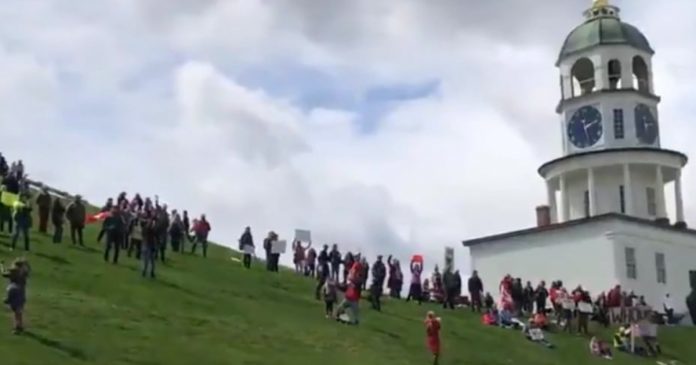 According to Justice Scott Norton, the injunction also prohibits organizers from promoting the rallies on social media and allows authorities to arrest anyone who fails to follow the ruling.

“Their plan to gather in-person in large numbers, without social distancing and without masks, in contravention of the public health recommendations and orders shows a callous and shameful disregard for the health and safety of their fellow citizens,” said Norton.

A rally by the group “Freedom Nova Scotia” was planned to be held at Citadel Hill, Halifax on Saturday afternoon and another one was scheduled later that day in Barrington.

In the decision, Norton described anti-lockdown rally organizers as “uninformed or wilfully blind” to the evidence behind health restrictions.

“I am personally all for freedom of speech, but will not allow the select few to jeopardize our ability to crush this third wave,” said Nova Scotia Premier Iain Rankin.

“People have a right to share their views but while we’re in a province wide lockdown, in the middle of a third wave, it is incumbent for all of us to protect each other by following public health protocols.”

According to CTV News, the injunction will be in place for as long as the province’s state of emergency is in effect.

As reported by True North fellow Lindsay Shepherd, provincial and federal governments have been unable to answer whether anti-lockdown protests actually lead to COVID-19 outbreaks.

Recent studies have shown that casual outdoor COVID transmission rates were much lower than previously believed.

This week, the US Centre for Disease Control also issued an advisory statement saying that “less than 10%” of COVID-19 case transmissions have occurred outdoors.