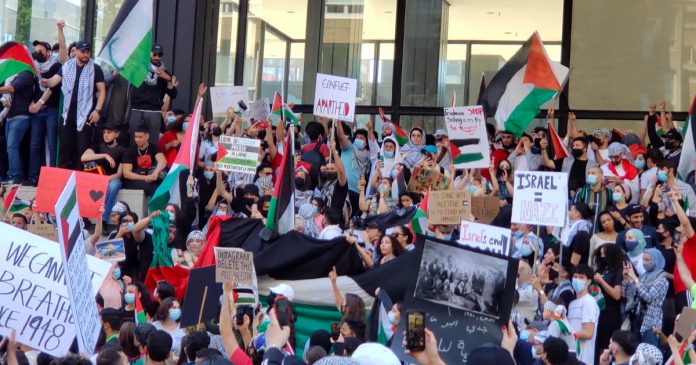 Pro-Palestine protestors clashed with pro-Israel supporters at Nathan Phillips Square in Toronto on Saturday as tensions in the Middle East continue to increase.

The Palestinian Youth Movement (PYM) said that it was organizing protests in more than 25 cities across North America, including Toronto.

The PYM said in a press release that they were taking to the streets to demand an immediate end to the “illegal expulsion” of Palestinians in Jerusalem and the bombing of Gaza.

“Palestinians and their allies demand that the U.S., Canada, and global community end all complicity in the Israeli occupation and colonialism by ceasing military funding, diplomatic cover to Israel, and repression of proponents of Palestinian rights,” said the PYM.

Thousands of pro-Palestine protestors attended the demonstration in Toronto. Protestors chanted slogans such as “Free Palestine” and “Allahu Akbar,” waved Palestinian flags and held signs with statements showing their support.

A small counterprotest was held nearby by the Jewish Defense League (JDL), a pro-Israel group. A heavy police presence separated the pro-Israel protestors from the pro-Palestinian ones.

However, as tensions increased, the pro-Palestine protestors allegedly surrounded the pro-Israel protesters and threw water bottles, eggs and other objects at the smaller group.

Police officers escorted pro-Israel protestors out after objects started to be thrown at them. Fights broke out between the two groups and between the officers who wanted to keep them separated.

Multiple Jewish Canadian organizations, including B’nai Brith Canada and the Centre for Israel and Jewish Affairs, said in a statement that the violence taking place at this protest was disturbing.

“We condemn in the strongest terms these brazen acts of assault, intimidation, and hate targeting members of Toronto’s Jewish community and supporters of Israel,” said the Jewish organizations in a joint statement.

“There is absolutely no justification for political violence in the streets of Toronto, whatever one’s cause may be.”

Ontario Premier Ford also condemned the violent protests. In a tweet on Sunday, Ford said the violent incidents should be investigated by the police.

“Discrimination or hatred of any kind against any community in our province should never be tolerated,” tweeted the Premier.

The battle between Israel and the terrorist organization Hamas continues to escalate. The violent clashes have led to at least 126 people killed in Gaza and 7 people in Israel. Since Monday, Hamas has fired over 2,000 rockets into Israel.