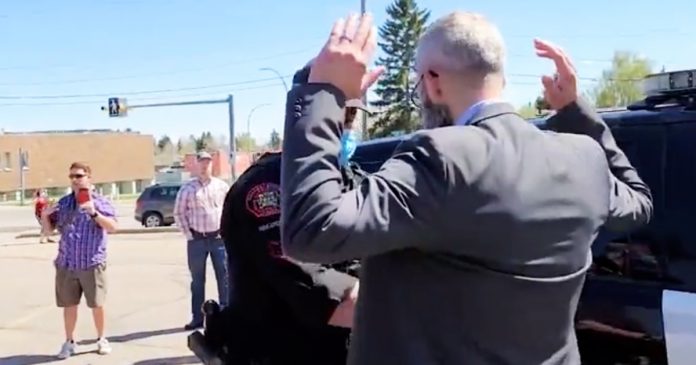 Police in Alberta have arrested a third pastor for holding church services in defiance of public health orders.

Video taken from the scene shows Pastor Stephens embracing his family and members of the congregation before entering a police vehicle.

“The government has obviously turned up the heat on churches and discouraged them from gathering together, but I don’t think they understand that Christians are committed to follow the lord Jesus Christ regardless of the consequences,” Pastor Stephens told Rebel News shortly before his arrest.

Earlier in May, Alberta Health Services (AHS) received a pre-emptive injunction to stop various gatherings and rallies that violate public health orders across the province.

In a joint statement, Calgary Police Services (CPS) and AHS cited the alleged violations of the injunction as the reason for the arrest. AHS claims they served Pastor Stephens a copy of the injunction last week.

“Once again, CPS acknowledges it is important to understand that law enforcement recognizes people’s desire to participate in faith-based gatherings as well as the right to protest. However, as we are still in a global pandemic, we all must comply with public health orders in order to ensure everyone’s safety and wellbeing,” the statement reads.

Two other pastors have been arrested in Alberta this year for holding church services. Pastors James Coates and Artur Pawlowski have also spent time in prison for holding religious services that violate Alberta’s strict limitations.