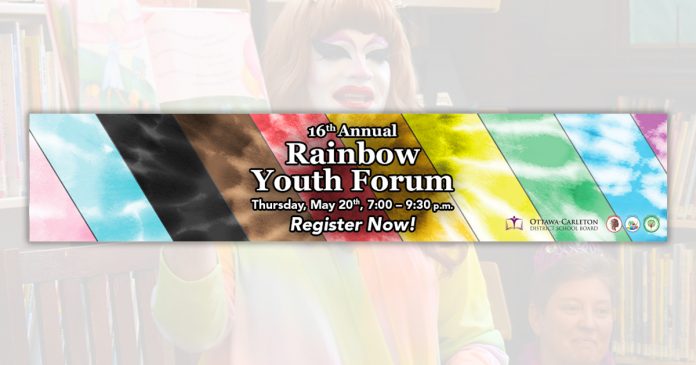 The Ottawa-Carleton District School Board’s (OCDSB) 16th Annual Rainbow Youth Forum will include a “drag storytime” and an event on “decolonizing gender” for this year’s virtual programming.

The forum will be taking place on May 20, 2021 and is open to students of “all ages.” According to the OCDSB, the forum is part of the OCDSB’s “Inclusive, Safe and Caring Programs” initiative.

“The 16th Annual Rainbow Youth Forum will include Decolonizing Gender, Drag Storytime, Workshops for Students and Staff, Chill Zone and a Rainbow Spring Fling Dance! This interactive virtual event will allow participants to ask questions and share their thoughts,” reads the event description.

“The RYF encourages safe and inclusive school environments by providing an opportunity to enhance knowledge and awareness about equity and diversity issues. The RYF aims to help build knowledge and understanding of sexual orientation, gender identity, and gender expression, as well as homophobia, biphobia, and transphobia.”

According to the event page, the forum is only open for registration for OCDSB students, parents and staff.

Drag storytimes are controversial events where adult men or women in drag attire read to children in the audience. Critics of the practice claim that the events serve to sexualize children and confuse their understanding of sexuality at an early age.

In 2019, a petition by the Canadian outlet LifeSiteNews and the pro-life group Personhood Alliance calling for the American Library Association to end the practice received over 100,000 signatures and prompted a reponse from the Association.

True North reached out to the OCDSB for clarification on the event and what “decolonizing gender” meant but did not receive a response by the time this article was published.