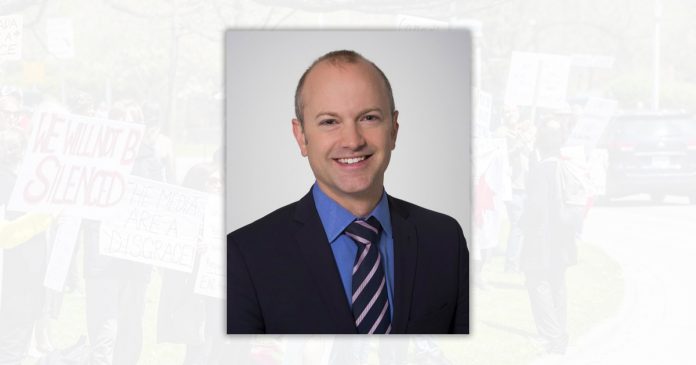 Toronto City Councillor Mike Layton alerted Toronto Police Services on Twitter to a weekend anti-lockdown rally despite repeatedly calling for the city to defund the police.

Layton accused the protesters of having “terrorized businesses and community members” and said that promoting protests should “have consequences” before tagging the official Toronto Police Services account.

“Promoting dangerous super spreader events should have consequences. They are not attempting to follow public health protocols and prompt the opposite. Also plenty of dangerous hate speech. They have terrorized businesses and community members long enough,” tweeted Layton on May 15.

In a follow-up tweet later that day, Layton wrote that organizers of the rallies and its promoters “should also be charged.”

On Saturday, thousands of supporters showed up to a planned “World Wide Rally for Freedom” in Toronto.

“I have regularly asked police why this is tolerated and they maintain [it] would be a greater public health threat if they began to issue tickets at these anti-mask rally’s. Councillors are not, nor should we, have the authority to direct the police on the enforcement of laws,” tweeted Layton.

At the same time as the Freedom Rally, there were dueling Palestinian and Israeli protests also taking place in the city. According to CP24, several individuals were arrested as a result of the rallies.

Layton has repeatedly joined his other councillors and Toronto Mayor John Tory to call for police to be defunded in accordance with the goals of the Black Lives Matter movement.

In February, a motion by Layton to explore defunding the city’s police was passed by Toronto City Council, with 22 councillors voting for and 4 voting against Layton’s motion.

“[We] are being over policed. We put too much responsibility on police & budget has ballooned. We need to defund and reinvest in communities & public safety measures best suited to the job. My motion called for transfer of more responsibilities for non-violent calls away from police,” tweeted Layton about the motion.

True North reached out to Layton to ask what “consequences” anti-lockdown protesters should face but did not receive a response by the time this article was published.