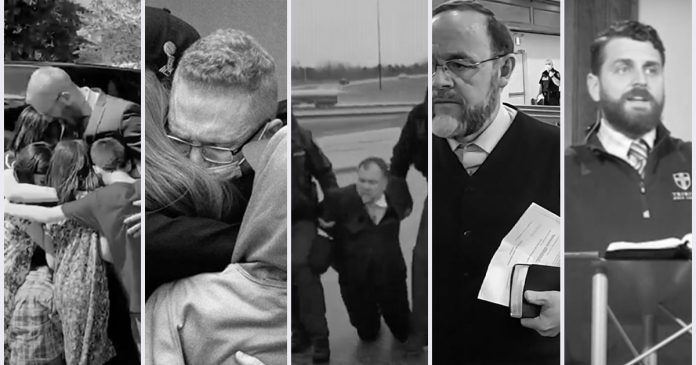 Freedom of expression, assembly and worship are Charter rights in Canada, but in the last couple of months, five pastors have been either arrested or charged for holding church services and not enforcing masks, social distancing or attendance caps.

Though some may claim that church services are COVID-19 superspreader events, there is no scientific or medical evidence to support such assertions.

You may have briefly clicked on a video clip or news headline featuring one of these pastors or churches, but here is a comprehensive guide to who’s who, with an update on each case.

On Sunday May 16, Pastor Tim Stephens was arrested and jailed immediately after holding a church service where masks, social distancing and attendance caps were not enforced.

Back in March, police showed up at Stephens’ home address and handed him three tickets: one for holding a gathering over 15% of fire code capacity, another for not enforcing the two metre rule and another for violating mandatory mask rules (this particular ticket was rescinded).

The Justice Centre for Constitutional Freedoms (JCCF) – the legal organization representing Stephens – states that his detention was illegal, as Stephens was arrested for violating a May 6 court injunction that the JCCF successfully got amended and was therefore inapplicable to him.

On Wednesday May 19, the Pastor’s wife, Raquel Stephens, confirmed that he had returned home. However, Alberta Health Services ordered Fairview Baptist Church closed.

Pastor James Coates made headlines earlier this year when he was thrown in jail for 35 days because he did not enforce masks, social distancing or attendance caps while holding church services. GraceLife was ordered closed by the province in January 2021, but congregants continued to meet in spite of the order. Coates was locked up in the Edmonton Remand Centre from February 16 to March 22, 2021.

In early April, Coates hosted Easter services at his church, at which point Alberta Health Services and the RCMP seized the church property and fenced off GraceLife indefinitely.

Since then, James Coates has delivered sermons from a secret location.

James Coates had two trial dates in early May related to his tickets, but the trial has been adjourned until June 7. Coates’ legal representation, the Justice Centre for Constitutional Freedoms, notes that the case still has a further hearing where the Alberta Government must produce their scientific and medical evidence for enforcing lockdowns.

During Easter of this year, video footage of Pastor Artur Pawlowski shouting at police to leave his church property while calling them “Gestapo” and “Nazis” went viral.

The police and Alberta Health Services officials did indeed leave that particular day. But after hosting a sermon on Saturday, May 8, Artur Pawlowski and his brother Dawid were arrested on the side of the road and dragged into police vehicles. Artur claims he was placed in solitary confinement for three days before being released on Monday.

Artur Pawlowski will be in court on May 26 for two hearings related to holding church services, and the tickets he received for alleged Public Health Act violations will be in docket court on June 14.

Back in April 2020, Pastor Henry Hildebrandt was facing threats of fines from police for leading over-capacity drive-in church services, even though parishioners stayed inside their vehicles in the parking lot with the windows rolled up as they listened to the service via radio signal.

In November, Hildebrandt received a ticket for attending an anti-lockdown rally in London.

On May 14, 2021, Hildebrandt’s indoor church service was interrupted by police. All congregants were directed to immediately leave the premises and police locked the doors to the building, as ordered by Ontario Superior Court Justice Bruce Thomas.

Hildebrandt’s church was found in contempt of court for holding repeated gatherings in violation of the Reopening Ontario Act.

On May 16, two days after the locks were changed, Hildebrandt led a 400-person service outside the building.

According to Pastor Jacob Reaume, the church has received dozens of tickets and has been convicted of two counts of contempt of court. In total, Reaume claims Trinity Bible Chapel and its elders are facing $40 million in fines.

“Places of worship have not been proven to be a source of significant outbreak,” the Justice Centre for Constitutional Freedoms lawyer representing Trinity Bible Chapel, Lisa Bildy, told CTV.

“They are not a major source of spread, but they have been a major target of enforcement.”