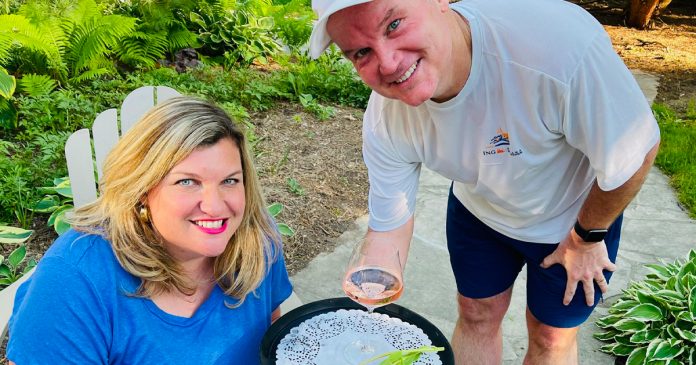 Conservative leader Erin O’Toole served up some Twitter sass and a crisp glass of wine in a single tweet.

After facing criticism from the left and a number of journalists for tweeting that his wife, Rebecca, gave him a “cold one” after a run, O’Toole made sure he was the one offering a beverage after the next run.

On Sunday, O’Toole tweeted a photo of him holding out a tray with a glass of rose wine on it to Rebecca, a not-so-subtle reference to the feigned controversy caused by the previous tweet.

“Brought Rebecca a glass of rose after my run today. Hope everyone is enjoying a relaxing long weekend,” he wrote.

On Friday, O’Toole tweeted that Rebecca greeted him at home with a cold beer.

“Starting the long weekend off right. Rebecca had a cold one waiting for me after my run. Wishing everyone a safe and relaxing long weekend,” he wrote.

O’Toole’s well-meaning tweet was immediately attacked by leftists and journalists for supposedly reducing women to antiquated stereotypes of housewives at their husbands’ beck and call.

This criticism was amplified after a tweet from CTV host Evan Solomon suggesting O’Toole’s tweet is at odds with the Conservative party’s plan to woo women voters.