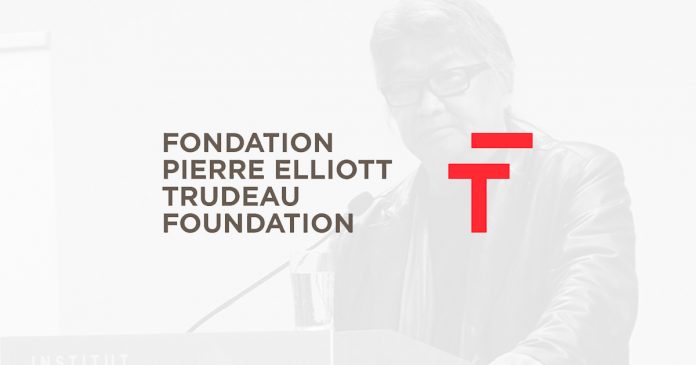 A former scholarship student with the Pierre Elliott Trudeau Foundation is suing the organization after claiming that she was sexually harassed by former premier of the Northwest Territories Stephen Kakfwi while he was her mentor there.

According to Nlaxa’pamux Nation member Cherry Smiley, the Trudeau Foundation attempted to cover up the matter by having her sign a non-disclosure agreement and told her that the alleged sexual harassment was a matter of “cultural misunderstanding.”

“They told her that it would be ‘bad for her’ if ‘this got out’ and that ‘Kakfwi could sue her’ and that the Foundation ‘could be accused of racism by Mr. Kakfwi,’” the lawsuit says.

“They attempted to minimize the sexual harassment, telling her that it was just a ‘cultural misunderstanding.’

Smiley first joined the foundation’s “Summer Institute” in 2016 as a second-year PhD student from Montreal. Only the foundation is named in the lawsuit and not Kakfwi himself or any other senior employees.

The Trudeau Foundation has yet to file a statement of defence to the allegations which have not been proven in court.

“The Foundation has a different interpretation of several facts alleged in the article published by Radio-Canada,” said the Trudeau Foundation’s Vice-Chair of the Board of Directors Dyane Adams in a statement on the original report.

According to the lawsuit, Smiley and Kakfwi had dinner together at a restaurant while Kakfwi was acting as her mentor.

“The dinner was unusual in that Mr. Kakfwi spent the entire evening talking about himself and did not ask the Plaintiff about her research or her areas of academic interest,” court documents allege.

The lawsuit continues to allege that the two took a cab to Sheraton Hotel where “Kakfwi suddenly moved his body extremely close to the Plaintiff and grabbed her upper arm, close to her breast, and squeezed it. He proceeded to hold onto her upper arm for an extended period, rubbing and massaging it.”

“The Plaintiff panicked and eventually pulled her body away from him,” it continues.

Another incident alleged in the lawsuit involves a gala at the Summer Institute where Smiley alleges Kakfwi grabbed her again and told her she could stay “in his spare bedroom.”

“She was especially frightened and intimidated given that she required a reference letter from Mr. Kakfwi in order to receive the subsequent year of her scholarship funding from the Trudeau Foundation,” the lawsuit claims.

After reporting the incidents, it is alleged that the foundation’s former CEO Morris Rosenberg phoned Smiley to discuss the allegations and accuse her of “blowing things out of proportion.”

“The Plaintiff was extremely uncomfortable and distressed during this offensive conversation. She felt disbelieved and under attack,” court documents claim.

As of August 2018, Kakfwi was removed from the program as a mentor, however, Smiley alleges she was then pressured to sign a non-disclosure agreement on the matter.

Smiley dropped out of the program as a result of the incidents. Smiley is seeking $500,000 in damages from the foundation for allegedly breaching its contractual duty and an additional $500,000 for breaching confidence. Smiley is also asking for $250,000 in punitive damages.