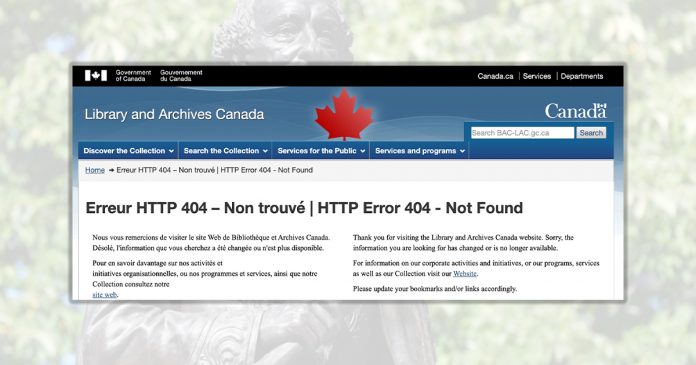 The Liberal government recently deleted a biography of Canada’s first prime minister Sir John A Macdonald after the Toronto Star flagged the webpage in an article.

As of Monday, Canadians trying to access Macdonald’s biography on Library and Archives Canada were met with an “error 404” page instead of an article about the former prime minister.

The Toronto Star first flagged the page in October in an article titled: “Want to know about John A. Macdonald’s racist past? Don’t ask the government of Canada.”

“Within hours of the Star requesting comment from the agency on Friday, notes appeared at the top of the Macdonald and Laurier biographies saying the pages had been ‘archived on the web,’” the article claimed.

A second article slamming the biography was published by the Toronto Star on June 5 revealing internal government debates about the biography’s lack of reference to Macdonald’s involvement in the residential schooling system.

Soon after, the page was completely removed from the Library and Archives Canada website.

According to an archived version of the biography, Macdonald is described as a “nation-builder” throughout the article.

“His role in creating Canada, and the realization of his dream to build a transcontinental railway, have fixed his place as a nation-builder in Canadian history,” wrote Library and Archives Canada.

“It was because of his role in Confederation that Macdonald was asked to be the first prime minister of the new Dominion government, a position he would hold almost continuously for the rest of his life. Macdonald’s first term in office was marked by nation building,” the article continued.

In recent weeks, activists have been calling for statues of Macdonald to be toppled and for places named after Canada’s first prime minister to be changed.

Most recently, Charlottetown, Prince Edward Island caved into demands by activists and quietly removed a public statue of Macdonald from its downtown core after a hurried evening vote on the matter.