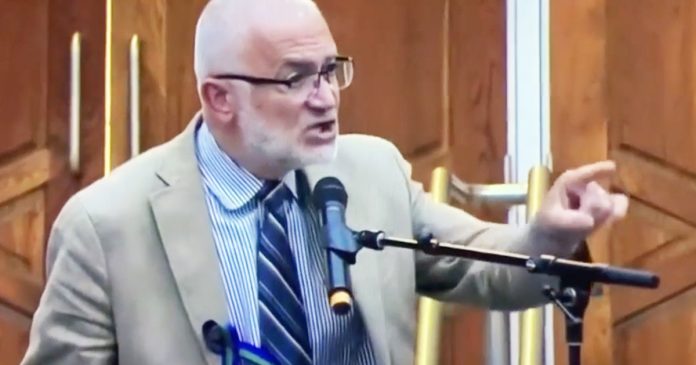 A speaker at the vigil held for the Muslim family killed in an attack in London, Ontario linked the murders with the Israel-Hamas conflict.

An imam of London’s Islamic Centre of Southwest Ontario, Munir El-Kassem used his brief remarks to veer into foreign policy.

“There’s a reason why they say the world is a small village. Every country has a foreign policy,” El-Kassem said. “I just want to say, whatever is happening in Jerusalem and Gaza is related to whatever happened in London, Ontario. Period.”

The crowd could be heard cheering following El-Kassem’s remarks.

El-Kassem was the final speaker at the vigil, which was attended by the leaders of all the major federal and provincial political parties.

“Linking this horrible crime to Jews or Israel is an irresponsible and inflammatory act,” B’nai Brith Canada said in a Twitter post.

In response to B’nai Brith Canada, El-Kassem said his words have been twisted.

“It has been painful to see my words twisted in a moment of incredible grief,” said El-Kassem in an Instagram post.

“I have only two things to say in response: 1) I will not be silenced by an organization that actively tried to prevent a motion acknowledging Islamophobia in the House of Commons, and has not apologized for that since. 2) Anyone who takes two minutes to listen to my response will understand what I said clearly – that the deaths of families here in London has (sic) happened too in Palestine. Our love and pain is universal. Any other interpretation is nonsensical and potentially defamatory.”

“This assertion is inflammatory and could lead to further antisemitism – particularly during a time when the Jewish community itself is still reeling from the violent assaults of the rallies held against Israel several weeks ago,” said human rights activist Avi Benlolo.

In its condemnation of El-Kassem’s remarks, CIJA also took aim at “conspiracy theories” circulating that the 20-year old charged with four counts of murder in connection with the attack is Jewish.

“At a time when false conspiracy theories (are) circulating about the attack being perpetrated by a Jew, this is incendiary and dangerous,” said CIJA in a tweet.

London police say the attack was premeditated and the victims were targeted because of their faith.