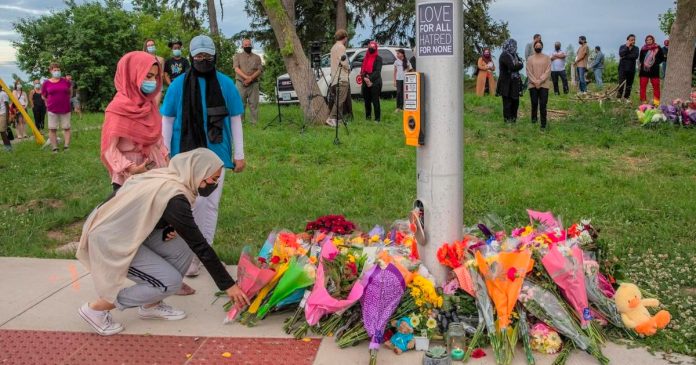 More details are being uncovered about the perpetrator of the London Ontario attack that killed four members of a Muslim family.

On Sunday evening, the Afzaal family was out for a stroll when they were attacked. According to London police, a man driving a pickup truck deliberately rammed into them, killing four and sending a nine-year old boy to the hospital with life threatening injuries.

Police identified the suspect who was arrested as 20-year-old Nathaniel Veltman. Veltman is currently being charged with four counts of first-degree murder.

Media, politicians and police officers all quickly jumped to the conclusion that this was a hate-motivated attack inspired by racism.

“There is evidence that this was a planned, premeditated act and that the family was targeted because of their Muslim faith,” said London Police Service Chief Steve Williams on Monday.

According to those who knew Veltman, however, there was little indication that he would murder a family in a hate-crime.

“Nate is not a radical terrorist. He is nothing like that. He is not an Islamophobe. That’s not who this kid is,” said a friend who is from the Middle East in an interview with the National Post.

“Nate was a very close friend and never said anything bad to me.”

Another friend described Veltman as “pretty calm” and having “never said anything hateful.”

“He’s Christian and has a great relationship with God… He was always pretty calm towards other people,” that friend told the National Post.

A co-worker of Veltman who worked with him at Gray Ridge Egg Farms told the Post that three days before the attack he had rode with him in his truck and Veltman complained about the vehicle’s steering.

“I actually drove with him on Thursday,” the friend told the National Post. According to him, Veltman was also “broken up” over a recent death in the family.

“He seemed broken up over it on Friday. That’s the last time I saw him.”

Meanwhile, court documents from Veltman’s parents’ 2016 divorce paint a picture of a “combative and argumentative” minor.

Documents show that Veltman was “frighteningly angry” towards his mother during the divorce and that he would take to “raising his voice and towering over her in an intimidating way, and pounding on doors.”

A CTV News report, which has since been removed, described how Veltman was “medicated for mental illness” and was being encouraged to seek therapy by his parents.

Veltman appeared for his first court appearance on Thursday morning. None of the charges have yet been proven in court.