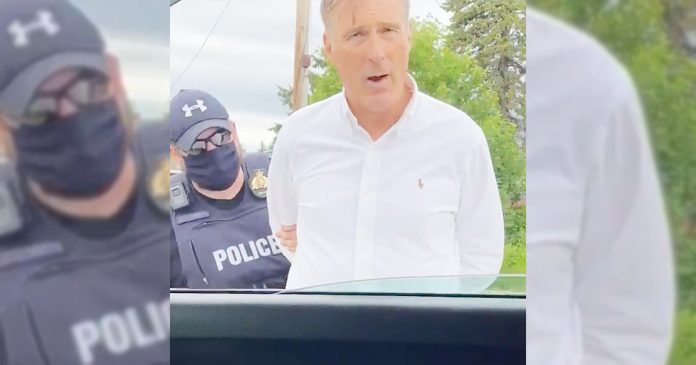 People’s Party of Canada leader Maxime Bernier has been arrested near St-Pierre-Jolys, Manitoba while on a cross-province tour protesting the province’s health restrictions.

True North has learned Bernier has retained a lawyer through the Justice Centre for Constitutional Freedoms (JCCF) to represent him.

In a news release on the matter, the JCCF called the arrest a “shocking attack on democracy and the Charter freedoms of speech, assembly and association.”

“The Justice Centre will be appearing in Court on Mr. Bernier’s behalf to respond to charges that were laid under Covid public health orders, which are already the subject of a legal challenge in Manitoba as to their constitutionality. Mr. Bernier is presently awaiting the opportunity to have Justice Centre lawyers address his bail,” the news release claims.

A video of the arrest posted to Maxime Bernier’s Twitter page shows an RCMP officer approaching Bernier who is seated in a vehicle to inform him that he is under arrest.

“If I can get you to step out of the vehicle, I’m going to place you under arrest right now?” the officer says.

“Right now you’re under arrest under the provincial health orders. Okay, so if you can put your hands behind your back and face towards the vehicle? Do you have any weapons or anything on you, sir?”

“Weapon? No, no weapon. Only my words,” said Bernier.

A PPC news release following Bernier’s arrest claimed that the party leader was arrested “for opposing the unjustified, unscientific, and disastrous lockdown measures that have been imposed on Canadians for over 15 months.”

“The arrest and detention of Mr. Bernier for supposed “health offences” is an exclamation point on the continued outrageous oppression of Manitobans by the Pallister government. Few, if any, other places on the planet are still locked down as tyrannically as Manitoba,” said JCCF President and lawyer John Carpay.

“It is far past time for the judiciary to restore the constitutional rights and freedoms of Manitobans, and end the arbitrary and oppressive diktats of Manitoba’s health regime. The Justice Centre stands ready to defend Mr. Bernier’s civil liberties.”