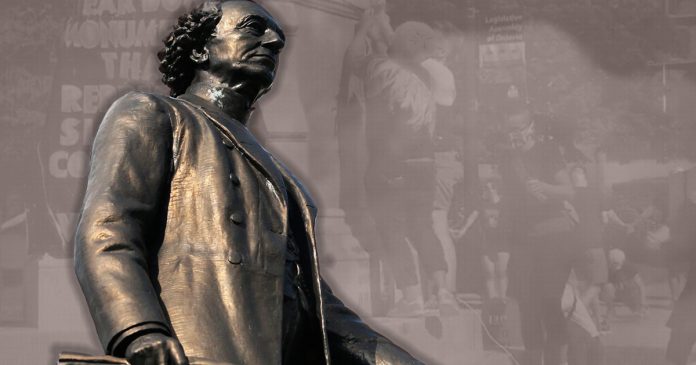 Canada is a great country, it’s a country worth celebrating.

A statement like that used to be banal and universal. Not too long ago, there was a general consensus not just among the political parties, but prevalent throughout Canadian society, that we lived in a pretty special place.

“The world needs more Canada” was once the slogan of Canadian book giant Indigo/Chapters, and the phrase was repeated by global celebrities like Barack Obama and U2 frontman Bono.

But that was a simpler time. All the way back in 2017, the world hadn’t yet been steamrolled by the woke mob pushing cancel culture and strict intellectual conformity.

The simplistic “woke” narrative goes something like this: western culture is nothing but a hierarchy of power, where everybody falls into one of two categories: oppressor or oppressed.

All individuals are reduced down to a few biological traits: skin colour, gender and sexual orientation.

Ironically, they’ve developed their own hierarchy: people move up or down the chain of oppression depending on the whims of the Twitter mob.

That is how newly-woke Conservative MP Michelle Rempel sought redemption last week after being unfairly blamed for playing a role in putting Canadian Muslims in danger.

“Yes,” she wrote, “I humble myself and ask forgiveness… I have privilege; I am cis/straight/white. But I am also a woman who works in a system dominated by white maleness.”

In other words, yes I’m awful because of my skin colour, but don’t forget, I’m a victim too!

According to the woke, everyone and everything is viewed through the lens of race, and anyone who doesn’t bow down to the woke mantra gets mobbed, bullied and ultimately canceled.

The only people spared from this fate are those who bend a knee, acknowledge their privilege and pledge to be re-educated in the woke ideology. It’s worked for good liberals like Justin Trudeau and Prince Harry. I’m not so sure it will save Conservatives seeking strange new respect, like Rempel Garner.

The ultimate goal of the woke mob is to tear down what they call hierarchies of power, essentially dismantling every institution in our society.

Canada seems to be ground zero for this new uprising.

And our founding Prime Minister, Sir John A. MacDonald, has so far bore the brunt of this moral panic. His statues have been defaced and removed from public squares, his name removed from university buildings, his biography erased from the Government of Canada website.

Sir John A is not alone.

As Alberta Premier Kenney correctly predicted, “the reckoning won’t stop with Sir John A.” If holding historical leaders to today’s evolving woke standards continues, then the entire “founding leadership of our country gets cancelled,” said Kenney.

In the past week alone, the woke mob has set its sights on renaming British Columbia, destroying a statue of Ryerson University’s namesake and cancelling Canada Day.

Rather than trying to appease a deranged woke mob, Canadians should stand their ground, defend our history (while learning from it, of course) and maintain some perspective.

Our country isn’t perfect, no country is. But Canada gets the big things right. That’s why we should celebrate Canada, not tear it apart.