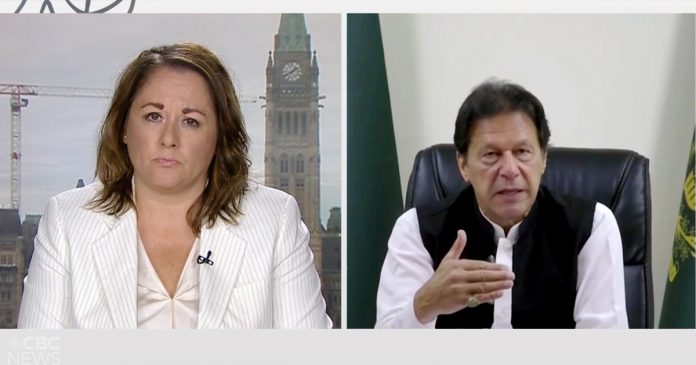 Pakistan’s Prime Minister Imran Khan appeared in an uncritical CBC Rosemary Barton live interview on Sunday in which he advocated for online censorship.

During the broadcast, Khan called for the international community to band together and implement further censorship against “online hate.” The discussion was in the context of the recent London, Ontario terror attack perpetrated against a Muslim family from Pakistan.

“What is it that governments should be doing, for instance, to shut down online hate towards Muslims?” asked Barton.

“I think there should be very strict action against it. Because you see, these hate websites, which again as I said, divide humanity by creating hatred,” said Khan.

“Unfortunately, while there’s so many benefits to social media. It’s changing the whole world. But when there’s these hate websites, which create hatred amongst human beings, there should be international action against them.”

When pressed on what the proposed international action constituted, Khan implied that some Western nations were not interested in tackling the issue.

“Whenever they decide upon taking action, this will be dealt with. The problem is at the moment there is not enough motivation. Some international leaders, leaders in the Western countries, actually don’t understand this phenomenon,” said Pakistan’s prime minister.

According to Khan, he said that through prior conversations with Prime Minister Justin Trudeau, he found that the two “mostly agree” on issues.

Foreign Policy Director and Munk Senior Fellow at the Macdonald-Laurier Institute Shuvaloy Majumdar addressed the interview on Twitter, calling Khan’s comments a “grotesque attempt at propaganda in the midst of a national tragedy.”

During the interview, Barton made no reference to the numerous human rights abuses the Pakistani government has been cited for by groups like Human Rights Watch. It was only until Prime Minister Khan had left the broadcast, that Barton referenced Pakistan’s atrocious record.

This month, Human Rights Watch, Amnesty International and the International Commission of Jurists called on the Pakistani government to act on a growing series of attacks against journalists.

Additionally, according to the World Report 2020: Pakistan, the Pakistani government has made no effort to repeal blasphemy laws that target Pakistan’s religious minorities. According to Pakistani laws, those found guilty of blasphemy can face the death penalty. Currently, 40 people are awaiting a death sentence for the Blasphemy in Pakistan.

The Canadian Left respond to the Kyle Rittenhouse Trial

The Canadian Left respond to the Kyle Rittenhouse Trial