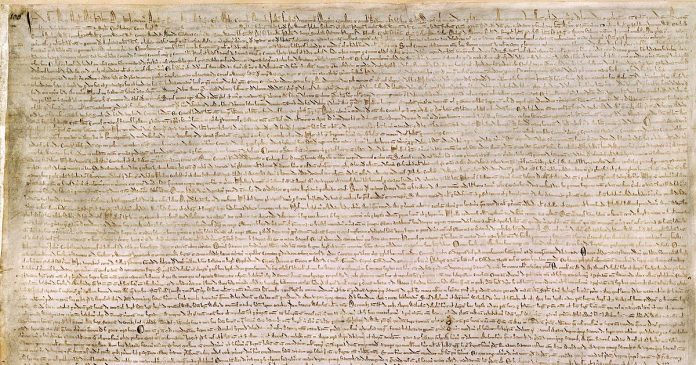 806 years later and Magna Carta still stands the test of time as one of Western civilization’s greatest achievements.

The document, which was signed by King John on June 15, 1215, set the foundations for England’s constitutional monarchy and enshrined the right of people to be free from tyranny. It was a sweeping legal treatise which for the first time ever placed strict limits on the powers of the monarchy.

Included in Magna Carta, also known as the Great Charter of 1215, were 63 clauses that dealt with protections from arbitrary imprisonment, rights to a free trial, limitations on taxation and a declaration on the rights of free men.

“No free man shall be seized or imprisoned, or stripped of his rights or possessions, or outlawed or exiled, or deprived of his standing in any other way, nor will we proceed with force against him, or send others to do so, except by the lawful judgement of his equals or by the law of the land. To no one will we sell, to no one deny or delay right or justice,” the third clause of Magna Carta reads.

At the time, those very rights that we take for granted today in the free world were considered revolutionary – radical, even.

In the early 13th century, England faced a political crisis that threatened to plunge the entire kingdom into a bitter civil war.

For years, King John of England ruled his subjects arbitrarily and without restraint. The King believed himself to be above the law and naturally his tyrannical style of leadership led to a conflict between the monarchy and the nobility.

After years of failed negotiations and dealing with a stubborn and unpredictable King John, a number of English barons rebelled against the Crown.

The baron’s demands were simple yet noble – that the King should respect and be subject to the law.

Despite resistance from King John, the rebels eventually seized on the monarch’s unpopularity and after taking the City of London, the King eventually returned to the negotiating table.

It was on the banks of the River Thames at Runnymede where King John eventually submitted and signed the historic accord.

Magna Carta, which is preserved in four surviving copies, eventually became a template for constitutions around the world, including Canada. To this day, Magna Carta stands not only as a rallying cry for justice and freedom but it continues to influence Canadian case law.

Canada and the rest of the world owes a great deal of its democratic tradition to that ancient and revered beacon of freedom.

Majority of immigrants proud of how Canada treats minorities

Majority of immigrants proud of how Canada treats minorities

Erin O’Toole says flags should be raised to full-mast