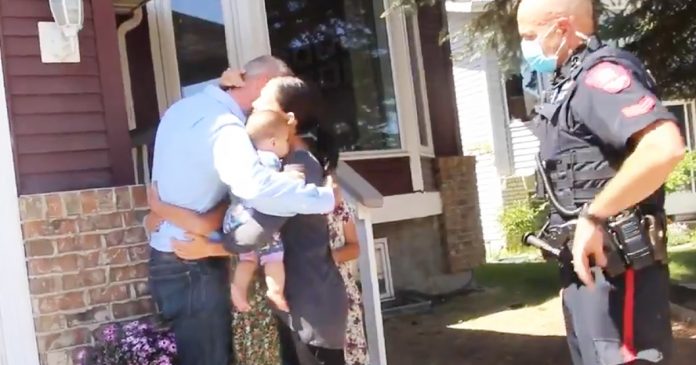 A Calgary pastor has been arrested for a second time for holding a gathering that violated public health orders.

On Monday, Pastor Tim Stephens of Fairview Baptist Church was arrested after he led an outdoor church service that police say did not comply with the province’s gathering limits and social distancing requirements.

In a video taken by Rebel News, Pastor Stephens can be seen embracing his wife and children in front of their home before being placed into a police vehicle.

The arrest has been condemned by the Justice Centre of Constitutional Freedoms (JCCF), which is representing Stephens in court. According to JCCF lawyer Jay Cameron, the arrest of Stephens is evidence that the Alberta government is trying to punish individuals who publicly oppose them.

In May, Pastor Stephens was arrested for allegedly breaking a prior court injunction regarding a former violation of public health orders. Fairview Baptist Church was later ordered to close its doors.

Later in the month, Alberta Health Services (AHS) dropped the charge against Stephens after it was revealed he was never served with the order he was accused of breaking.

“In two weeks, literally tens of thousands of people will gather in Calgary for a massive rodeo party, but Tim Stephens cannot lead his congregation in worship because Premier Kenney believes this to be too dangerous,” he said.

“The province is supposed to be fully opening in less than two weeks and yet AHS is leading the charge to lock up Christian pastors, and anyone else who criticizes Alberta’s thin-skinned health tyrants.”

In a statement, Calgary Police Services (CPS) say they received multiple calls complaining about the event and that Pastor Stephens was aware he was violating public health orders.

“It is important to understand that law enforcement recognizes people’s desire to participate in faith-based gatherings. However, as we are still in a global pandemic, we all must comply with public health orders in order to ensure everyone’s safety and wellbeing.”

Pastor Stephens will remain in jail until he appears in court on June 28.