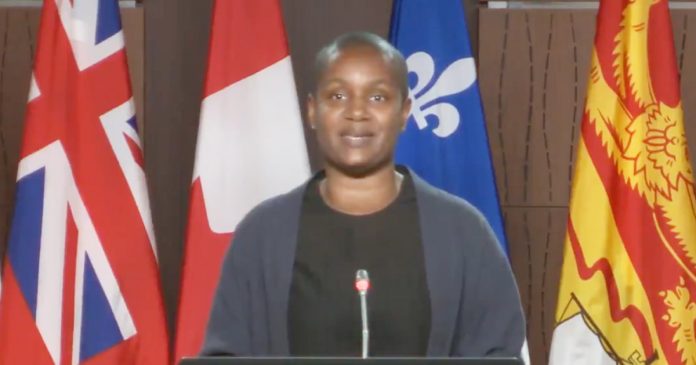 Green Party Leader Annamie Paul took shots at Prime Minister Justin Trudeau while giving a speech in which she accused fellow party members of waging a “racist” attack on her leadership.

Paul held a press conference on Wednesday, following a non-confidence vote levelled against her.

“A small group of councillors sought to force a vote of no-confidence in my leadership. They did so with no substantive consultation with the members they represent. They produced a list of allegations that were so racist, so sexist, that they were immediately disavowed by both our MPs as offensive and inflammatory and contrary to party ethics,” Paul told reporters.

According to a copy of allegation of non-confidence obtained by Global News, party members said Paul “has acted with an autocratic attitude of hostility, superiority and rejection.”

Members also accused the Green Party leader of “failing to develop a collaborative working relationship, failing to engage in respectful discussions, and failing to use dialogue and compromise.”

“She has attended few council meetings, and when in attendance, has displayed anger in long, repetitive, aggressive monologues and has failed to recognize the value of any ideas except her own, acting in a manner not in compliance with the leader’s role and responsibilities,” the allegation reads.

The internal party feud reached its boiling point earlier this week after former Green Party MP Jenica Atwin crossed the floor to the Liberals over dissenting views on the Israel-Hamas conflict.

During her speech, Paul also accused Trudeau of faking his social justice views and not being a real “ally” or a feminist.

“The Liberal Party of Canada has demonstrated that it is hell bent on winning their majority at almost any cost. By their admission, in recent days, they have sought to sow division, and to create disarray,” said Paul.

“That claim that they are allies is one where they talk the talk without walking the walk. To the prime minister, Justin Trudeau, you are no ally and you are no feminist.”

Paul also accused Trudeau of failing to support “strong, capable, competent women” in politics and “pushing them out” of the party fold when things don’t go his way.

At the height of the SNC-Lavalin political interference scandal in 2019, several women – including former justice minister Jody Wilson-Raybould – left the Liberal Party caucus after it was revealed that Trudeau attempted to interfere in the justice system.

Ethics Commissioner Mario Dion eventually found the prime minister guilty of breaking ethics laws a second time over his conduct in the affair.