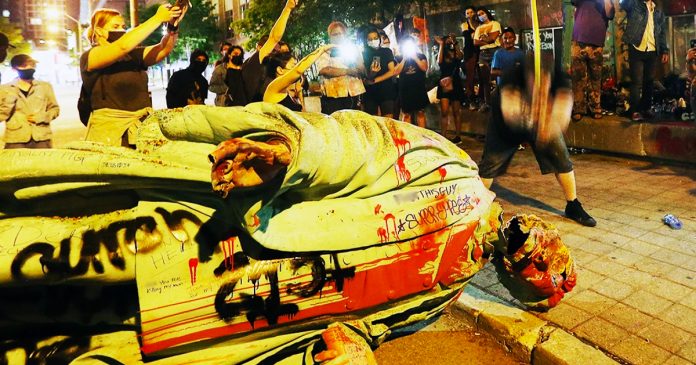 Sir Winston Churchill has become the latest victim of the deranged woke mob in Canada.

Churchill joins the esteemed club of historical figures who have had their statues defaced or torn down in recent weeks and months in a fit of criminal rage by a nameless, faceless mob.

And while there is feigned condemnation from left-wing leaders over the illegal destruction of property, there is a growing political and intellectual movement that seeks to legitimize the woke worldview.

When news broke that Churchill’s statue in Edmonton had been doused with red paint, Edmonton’s wannabe woke mayor Don Iveson failed to condemn the mob. Instead, he promoted the idea that we should apply today’s hyper-politicized speech standards to historical figures.

Iveson said he welcomed discussions of “addressing historical wrongdoings and inequities like systemic racism,” but simply noted there are better ways to do this than “vandalizing city property.”

Nisha Patel, the City of Edmonton’s Poet Laureate, a taxpayer-funded government position, openly voiced support to the vandals and their political tactics.

She told Global News that the vandalism simply shows that “any attempt at dialogue or outreach has truly failed,” and that “there are angry people with valid feelings who want to express their frustration.” According to Global, “she added it’s important to note the people who vandalized the statue did not harm anyone.”

You get that? If you’re on the far-left, it’s perfectly reasonable to be angry and express your frustration through the destruction of property.

Patel goes on to say: “I think if this is what it takes to reach a critical point, where opposition is taken seriously by people who are bigoted, then this is what we have to do.”

Must be nice to be a Poet Laureate.

And of course, Patel is far from the only public figure that seems to hate Canada so much that she wants to destroy every institution in our country.

That would be news to my husband’s family, who escaped tyranny in Iran and found a peaceful, welcoming home filled with opportunity and freedom in North Toronto. I guess they didn’t get the memo that one politicized tragedy in London, Ontario means that Canada’s one million Muslims are no longer safe in the world’s most diverse, tolerant and open society.

A 27-year-old MP in Singh’s caucus echoed this hatred for Canada in her farewell speech to the House of Commons on Tuesday.

Mumilaaq Qaqqaq, NDP member for Nunavut, blasted Canada as a colonialist hellhole built on the oppression of Indigenous people and whose history is stained with blood.

Her angry rant, filled with baseless accusations and fanatical hyperbole, was applauded and promoted by the legacy media. I’ve yet to see a single public figure counter her radical claims or refute his fever-dream excoriation of our country.

If that’s your worldview — and it seems that is the view held by cultural leftist elites these days — then it’s no wonder why they want Churchill’s head on a platter. Sure, he beat Hitler and stopped the Nazis. But Canada, and indeed all of Western Civilization, is just as bad.