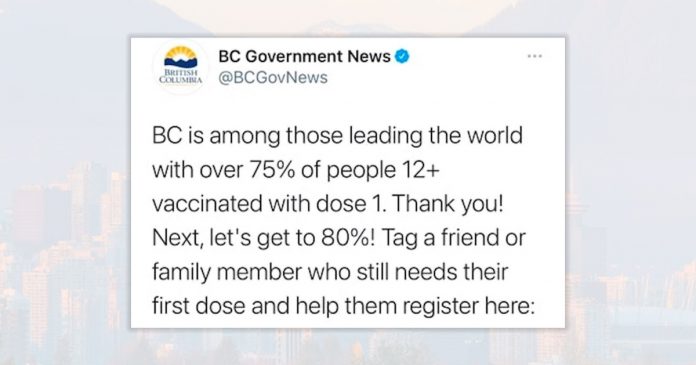 The British Columbia government has apologized after asking Canadians to snitch on their unvaccinated family members.

On Thursday, an official BC government Twitter account called on residents to tag their unvaccinated friends or family members in the replies. The tweet has since been deleted.

“Thank you! Next, let’s get to 80%! Tag a friend or family member who still needs their first dose and help them register here: gov.bc.ca/GetVaccinated,” read the tweet.

Despite the tweet’s deletion, an unknown number of people were publicly outed as unvaccinated in the replies.

According to Black Press Media, the BC government apologized for the incident saying that they will work to “ensure this does not happen again.”

A survey by Leger from 2020 found that 40% of Canadians were willing to snitch on their fellow citizens for not complying with COVID-19 measures.

In comparison, only 27% of Americans were willing to do the same when asked the same question.

Several places including London, Ontario have established COVID-19 snitch lines where residents can report others for breaking gathering limit rules or playing sports in parks.

In British Columbia, the City of Vancouver has a reporting system where residents can report house parties with 6 people or more and gatherings of 50 or more people.